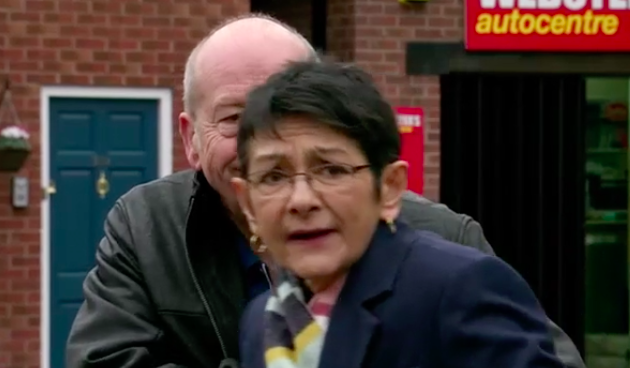 Yasmeen was left humiliated as Geoff handed over just a fiver

Coronation Street fans thinking controlling Geoff Metcalfe might have been given pause for thought after Yasmeen confronted him over his behaviour were left disappointed on Friday night.

Abuser Geoff realises that other people have begun to see his behaviour towards his wife for what it is – coercive control.

And last night when Eileen Grimshaw publicly invited Yasmeen to the day trip to Blackpool to support Rita she told her loudly: “Don’t look at him!”

Geoff angrily hit back: “She doesn’t need my permission!”

But it became clear she did when Yasmeen quietly asked him if he was sure she could go and he told her to enjoy herself before handing over just five pounds.

Viewers know evil Geoff has manipulated Yasmeen into giving him control of all of her money and so she doesn’t have anything for herself.

But the humiliation of him giving her just a fiver of her own cash left viewers absolutely sickened.

One wrote: “I’m worried for poor Yasmeen, Geoff will be furious that’s she’s been out and had a good time, he’ll make her pay – and don’t start me on the fiver he gave her! 🤬 #corrie10000 #corrie”.

A second said: “As if Geoff give Yasmeen a fiver to enjoy her day out in Blackpool, what a tight [expletive]! #Corrie”.

A third said: “Shove your fiver Geoff you maggot #Corrie”.

The horrifying scenes are the latest in a long line of scenes showing the true horror of coercive control and what it is doing to Yasmeen.

This week Geoff took his abuse one step further and locked Yasmeen in his magic trick box before leaving her confined to go to the pub – putting her in a terrifying panic attack that left her passing out.

And now fans have been complaining to regulatory body Ofcom about the scenes.

One upset soap fan tagged Ofcom when they tweeted: “Between Emmerdale and Coronation Street with their horrid ‘entertainment’, we will all be having nightmares tonight! What happen to the days of light entertainment? @Ofcom.”

Another said: “Wonder if Ofcom will step in about this? It’s been taken way too far now @itvcorrie.”

A third declared: “I’m writing a letter to Ofcom.”

Has Corrie gone too far with the storyline? Leave us a comment on our Facebook page @EntertainmentDailyFix and let us know what you think!