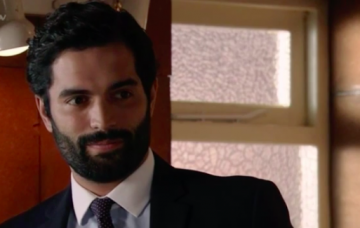 Weatherfield's solicitor was caught with his pants down (nearly)!

Watch out Steve McDonald! Weatherfield has a new Lothario in town – and Corrie fans are fully on board the crush bus.

In comedic scenes shown last night (Wednesday 5 December), solicitor Imran Habeeb was forced to take cover on the balcony in an attempt to keep his illicit fling with Toyah Battersby a secret.

And fans fully approved of Imran’s predicament as he was still in his boxer shorts!

Viewers know that Imran and Toyah have been sneaking around behind sister Leanne’s back, worried she’d disapprove after her recent fling with Imran too… Yes, it’s awkward.

But we also know that Leanne has been secretly seeing Nick Tilsley, too!

In typical Carry On Corrie form, both affairs were exposed on Wednesday, when Leanne and Nick returned home unexpectedly and nearly caught Toyah and Imran at it.

When Leanne and Nick arrived at home with the same idea as Toyah and Imran, Imran hid half-clothed on the balcony, while Toyah locked herself in the bathroom…

However, when Toyah accidentally made a noise in the bathroom, Leanne shoved Nick out of the window – where he bumped into an embarrassed Imran!

Fans loved the awkwardly hilarious scenes, with many announcing a serious soft spot for Imran.

One fan admitted: “My crush on Imran is getting out of control. Jesusssssss.”

Others called Imran “hot” and many others revealed they thought Toyah and Imran made a “cute couple”.

Now their respective affairs are out in the open, could a future joint wedding be on the cards?

Or are we getting ahead of ourselves?

In real life, actor Charlie De Melo – who plays Imran – is dating fellow co-star Nicola Thorp who will return to the cobbles next year.

Who is your favourite Corrie eye candy? Leave us a comment on our Facebook page @EntertainmentDailyFix and let us know what you think!