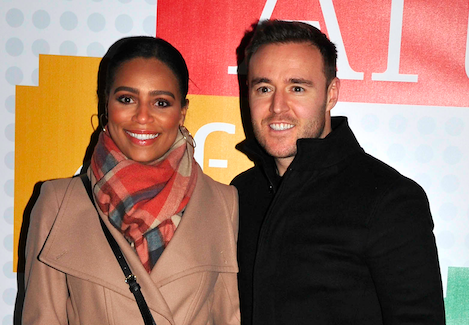 He's already a dad of one

Tisha Merry and her Coronation Street boyfriend Alan Halsall has provoked gossip she could be trying for a baby, after she was seen wearing a fertility device.

The actress Tisha sparked speculation she’s trying to conceive when she chose to wear a fertility bracelet this week.

Tisha, who met Alan on the set of Corrie when she played Steph Britton, shared a post about her menstrual cycle and fertility with her social media followers.

Writing on her official Instagram account, Tisha said: “For the last 12 years I’ve struggled to find a natural way to monitor my cycle.

“Thanks to @avawomen, their highly advanced sensor bracelet can track your cycle and fertility whilst giving accurate insights into your sleep quality, physiological stress, pulse rate and more. All whilst you sleep!”

She continued: “I’ve finally found my balance. Whether you’re trying to conceive, or just want to learn about your cycle, I definitely recommend Ava.”

She went on to offer a £20 discount to her followers, in the paid promotion.

Perhaps they are looking to take their relationship to the next level.

A friend of Tisha is said to have spoken to The Sun Online, saying: “It’s not gone unnoticed that Tisha has been wearing the electronic band, so perhaps they are looking to take their relationship to the next level.

“They have made no secret of the fact that they are both head-over-heels in love with each other, and Alan is already a brilliant dad so having another child would hold no fears for him.”

However, a spokesperson for Tisha told the website: “Tisha is absolutely not looking at starting a family, she is working with the makers of the bracelets and using one to monitor and control her menstrual cycle which has been problematic for over 10 years.”

Tisha and Alan went public with their relationship at his co-star Sam Aston’s wedding to Briony in May this year.

Months later, she moved into Alan’s home in Worsley, Manchester, which he formerly shared with his ex-wife Lucy-Jo Hudson.

Alan is already a dad to daughter Siena, his child with Lucy-Jo.

Lucy-Jo is now expecting a child with boyfriend Lewis Devine.