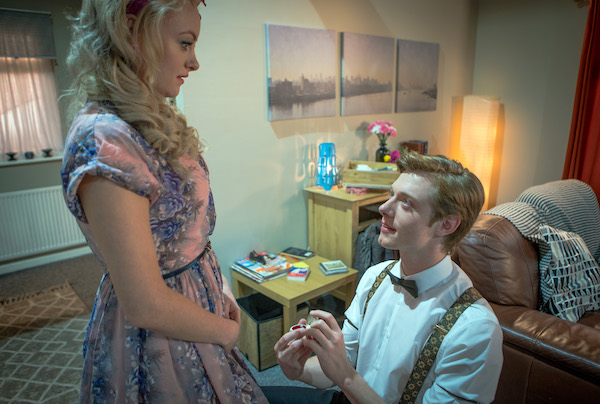 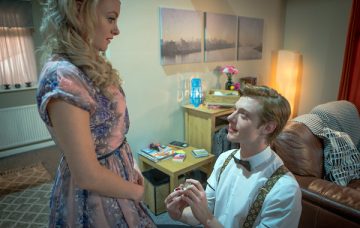 Encourged by Flora McArdle, he pops the question to the factory worker

It looks like wedding bells could be in the air – again – for Sinead Tinker in Coronation Street next week when boyfriend Daniel Osbourne asks her to marry him.

Daniel is encouraged by his pensioner friend Flora McArdle as she prepares to leave the cobbles for good.

But before she departs, she digs out her jewellery box and hands him her own mother’s engagement ring, telling him he should ask Sinead to marry him.

Which is interesting as just weeks ago she was accusing the knicker-stitcher of trying to poison her.

It doesn’t take a lot to persuade smitten Daniel and he’s soon down on one knee asking Sinead to be his wife. But what will she say?

Bearing in mind it was only six months ago that Sinead was heading up the aisle by her ex-fiance Chesney Brown, is she ready to have another wedding already?

Elsewhere it looks like Flora will be able to afford her own posh nursing home after a savvy Adam Barlow looks into her dead son Harvey/Vinny’s estate and finds out he’s left his mum £250k.

When she gets the news, Flora tells Daniel that she can move out of the flat now and encourages to move Sinead in. Will Adam be ok with that?

As Daniel tries to round up the Street residents to attend Harvey/Vinny’s funeral to make Flora believe he was liked, Tracy gets wind of Flora’s windfall and tries to make out she was besties with her son.

She’s got a devious plan behind her actions though, secretly hoping she can charm the OAP into investing into the florist, but when Daniel catches on to what she’s doing, he’s livid.

He furiously confronts her and devastates her with some shocking news – her boyfriend Steve McDonald tried to kiss his ex Michelle Connor on her wedding day to Robert Preston.

Tracy is heartbroken, but when she confronts Steve over it, it leads to a very unexpected turn of events.

Do you think Sinead will say yes to the dress? Leave us a comment on our Facebook page @EntertainmentDailyFix and let us know what you think!

Coronation Street airs Monday, Tuesday and Friday next week. Times vary due to the World Cup.