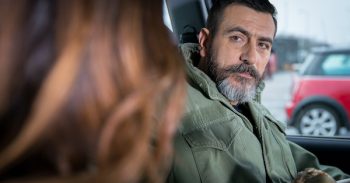 His bid to help Carla has far-reaching consquences

Things are taking a tragic turn on Coronation Street this week as one resident loses their life, and it looks like the drama is set to have a huge affect on Peter Barlow in particular.

After the factory roof collapses, the love of Peter’s life, Carla Connor, is set to go on a downward spiral as she struggles with the guilt over her part in the death.

As she suffers a breakdown and disappears, Peter’s desperate hunt for her will end in him hitting the bottle again, according to the Daily Star Sunday.

Pap pictures have already revealed Peter and Carla’s dad, Johnny Connor, trying to save her from a squat, but whether they manage to rescue her, remains to be seen.

If Peter is set to turn back to the booze, it would seem not – unless there’s something else he’s hiding…

He has been named as one of the suspects in the roof collapse, alongside Carla, Nick Tilsley, Gary Windass, Seb Franklin and Robert Preston.

Speaking about the roof collapse, Chris Gascoyne, who plays Peter has revealed his alter ego is in a dark place at the time of the disaster after a row with Carla – but is it enough to damage the factory roof?

“Peter is hurt and angry, he wouldn’t want anyone to get hurt but like everyone else he thinks the factory is going to be empty the next day as he has heard Carla say so,” Chris revealed.

“Could this be him lashing out against the factory, the one thing that has always come between him and Carla, her ambition and single-mindedness that seems to override everything else?

“Or could he be doing it to try and help her as he leaves? He knows she is close to going bust, if the factory roof problems got worse then maybe she would be able to claim on the insurance and it would help her out.

“At the very least would it mean she needed him around? It is complex but it gives him motive.”

So if Peter did damage the factory out of revenge or even some sort of misguided attempt to help the woman he loves, could the guilt over his actions be what causes him to hit the bottle?

Chris has previously revealed that if Peter were to leave the Street, he’d want him to be killed off by drinking himself to death.

Could this relapse be the beginning of the end for Peter?

Are you looking forward to this storyline? Leave us a comment on our Facebook page @EntertainmentDailyFix and let us know what you think.