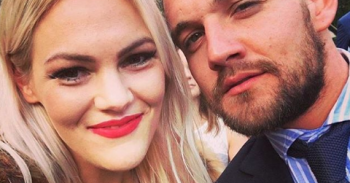 He also opens up about engagement plans

Soap star James Burrows’ first child will be a girl, he has revealed.

The actor’s girlfriend Sophie Coates told OK! magazine it was not an unexpected surprise when she became pregnant late last year – but admitted it hadn’t been all that long since they’d started planning for a family.

“We’d only recently said we’d properly start trying. And a month later we fell pregnant,” she is reported to have told the mag.

Coronation Street favourite James – who confirmed the couple were expecting last October on Instagram – recalled he found out the happy news himself while he was at work.

According to OK!, Sophie told him they would become parents over the phone one morning at 7.30am as he filmed scenes in Weatherfield.

The 27-year-old also told how he decided to tell co-star Kym Marsh – who plays his on-screen mum Michelle Connor – about being a dad-to-be before anyone else.

He said recalled: “She got really excited and gave me a massive hug and said I’d be a great dad.”

Kym – soon to be a grandma in real life – echoed those thoughts when she wrote in her mag column back in October that she was “absolutely over the moon” for the couple, reckoning James will prove a “brilliant daddy”.

It was revealed that James intended to propose to Sophie during a winter trip down under – but their baby news interrupted his plans.

“I’d liked to have got engaged before now,” James added. “I was going to ask Sophie in Australia when we were visiting my family last November but then we found out we were expecting.”

He said at the time when announcing a baby would be coming along: “We cannot contain our excitement we are so, so happy.”

Dr Ali star James, who became a Corrie regular last summer, and Sophie are said to have been together for three years.