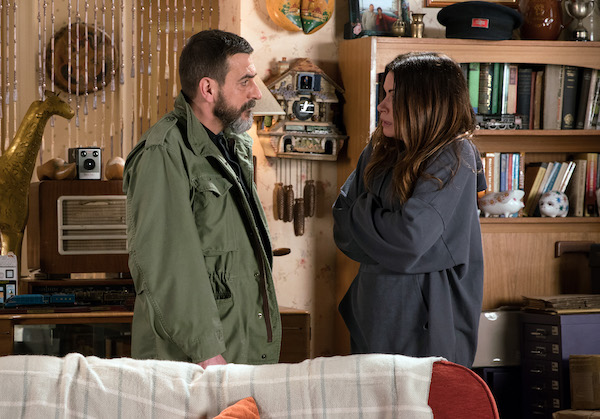 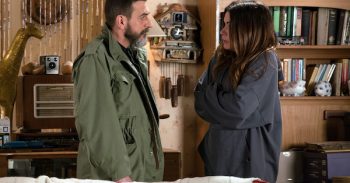 Her state of mind is still a worry

Carla Connor makes a dramatic return to Coronation Street next week after her friends and family desperately try to track her down, but they’re soon worried about her state of mind.

Coronation Street fans saw Carla disappear after the guilt of the factory roof collapse got too much for her, and despite the fact she isn’t the one to blame for the tragedy that took Rana Habeeb’s life, she still feels responsible for what happened.

After Roy returns from Portsmouth next week, he is shocked to see the missing posters for Carla everywhere.

As he is filled in by the Connors about their search for Carla, Roy and Johnny go to the hotel where Carla has been staying and are shocked by the state of her room.

But with Carla nowhere to be seen, the pair panic that they’re too late… and when they see that she has left her kidney medication behind in the hotel, it soon becomes apparent that they need to find Carla more desperately than ever.

As they return to the cobbles, Roy tells Johnny that he regrets throwing Carla out of his flat and will never forgive himself if something awful happens to her.

But little does he know, Carla is hiding in the shadows and has heard everything.

With their search for Carla seemingly fruitless, Roy returns home exhausted and disappointed… but he’s about to get the shock of his life when he gets back and finds Carla waiting for him.

Roy is stunned at the mess his friend is in and is soon feeling uneasy about her state of mind when she tells Roy that everyone is out to get her and that she is convinced Kate is hiding Rana from everyone, and that she’s not dead at all.

Roy begs Carla to go to hospital, knowing she needs medical assistance immediately, but she refuses and starts asking for Aidan… leaving Roy shocked to the core.

The following day Carla freaks out when she wakes up in hospital to find Johnny and Roy at her bedside, but the person she really wants to see is Peter, and she has no idea that he is back in rehab.

As Roy tells Ken that Carla is asking after Peter, Ken refuses to tell his son, determined that nothing should stand in the way of his recovery. But will Roy listen?

Later in the week Peter is back, and after the doctor explains that Carla is being put on antipsychotic drugs and sent home, he asks Ken if the pair of them can move back in to number one.

But Ken doesn’t think that Peter is well enough to look after himself, let alone Carla, and refuses to let them move back in with him.

However, Roy soon offers the pair a room in his flat and Ken is fuming, believing they should each be separately concentrating on getting themselves back to full health.

Is Ken right and Carla and Peter are bad news for one another at the moment?

Or is this a chance for the couple to help each other find a way out of their darkest days?

Are you pleased to see Carla back? Leave us a comment on our Facebook page @EntertainmentDailyFix and let us know what you think!