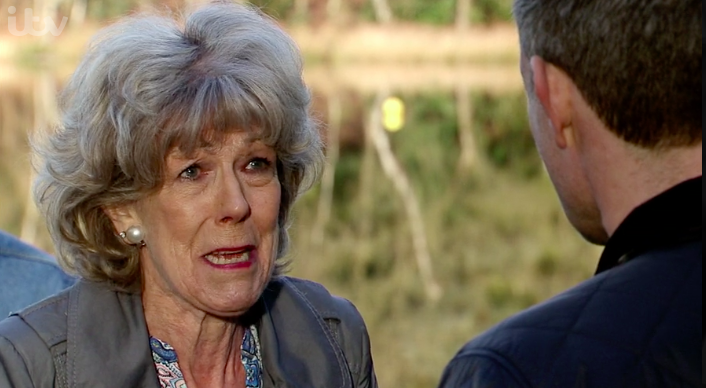 Nick Tilsley got what was coming to him in last night’s Coronation Street – and about time, too.

On Wednesday night (May 29), Audrey Roberts discovered the horrible truth about what her grandson had done to her and she was devastated.

In emotional scenes, Audrey confronted Nick with the truth – that he had robbed her of £80,000 and allowed her to believe the money was stolen by her boyfriend Lewis Archer.

As Audrey raged at Nick for “desecrating” Lewis’s reputation and her memories of him, Nick showed no remorse and blamed Lewis for being untrustworthy in the first place.

When he tried to pin the blame on Lewis and his previous shady dealings, Audrey saw red and SLAPPED her grandson around the face.

As Nick looked shocked at his gran’s uncharacteristic attack, those watching from home were punching the air and whooping in glee!

One bloodthirsty viewer wrote: “Nick deserves much more than a slap.”

Another added: “He should have been slapped harder to make him fall in the river.”

“He deserved that slap,” added one more. “He’s had it coming for a long time.”

Others called Nick “callous”, “horrible” and a “slime ball”.

Some viewers applauded David Platt for getting a conscience and confessing the truth to Audrey in the first place, while others fumed at Gail for defending her sons…

And did Nick PAY Gary Windass to sabotage the roof? Some fans think so!

With the Platt family torn apart by the sad betrayal, Audrey swore to make her grandsons “pay the price for this”.

As Gail Rodwell tearfully reminded her mum that she forgave Lewis for his sins, she begged Audrey to show compassion for her sons too.

But, with spoilers indicating Nick soon goes to court, it looks like Audrey shows no mercy at all…

Do you think Nick deserved to be slapped? Leave us a comment on our Facebook page @EntertainmentDailyFix and let us know what you think!