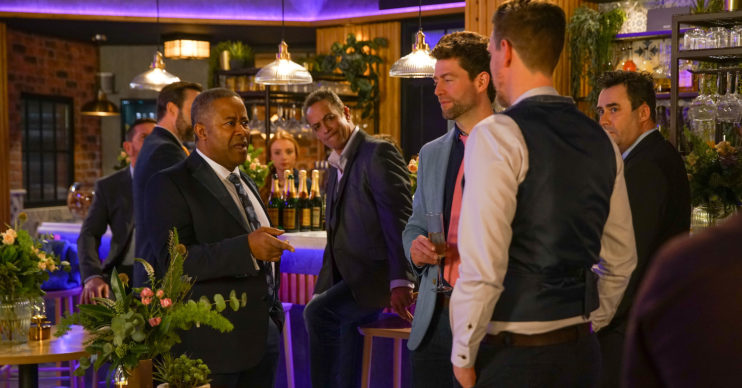 Ed had had enough

Coronation Street viewers were in tears after Ed Bailey’s powerful speech about racism.

The builder demanded racist Don explain himself after making another vile comment about Ed and son Michael.

He called Don out publicly at the Bistro’s reopening – but owner Ray tried to stop him.

Ed said: “When is the right time to face up to a racist? Oh, you were just having a laugh? I’m too sensitive?

“I am so weary. I’ve had a lifetime of people calling me names, and I have heard every name and every stupid comment you can think of.

“I’ve had people do my accent, or maybe their own brilliant Caribbean accent. I’ve people like you ask me if I can read, ask me if I went to school, if I can swim.”

He added: “I’ve had people like you assume I’m a criminal if I can get them some stolen goods or some ganja.

“I’ve had them ask if I came in on the Windrush, I’ve been asked what I eat, what cricket team I support.

“I have heard it all a thousand times but I don’t think any of these good people have so let’s hear it again one more time.

But horrified faces surrounded Ed as he revealed what Don had been saying.

Viewers in tears over the speech

He added: “I am weary, but as a wise young man once said to me, ‘If I give up, then I’m just leaving the fight for someone else’.”

Don muttered an apology – which Ed promptly told him to “shove it”.

Ed and his family left the party with their heads held high, and viewers were in tears at the speech.

One said: “Loved Ed in @itvcorrie had tears when he stood up to the racist idiot.

A second said: “Kudos to Corrie for dealing with this issue tonight.”

“Oh no Corrie is making me cry. Ed finally having a proper talk with James and helping him stand tall in his sexuality, is what we’ve all wanted to see,” said one more.

“Tonight’s, it has to be said, was a masterpiece. The monologue was agonisingly real, the emotion in the closing scene between Ed and James was sublime, and that direction – *chefs kiss*,” agreed someone else.