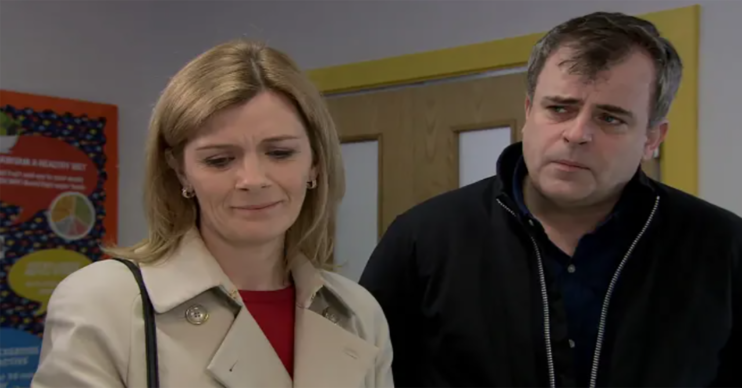 It could bring them together

The former couple will be united in devastation soon when doctors reveal Oliver has life-limiting mitochondrial disease.

And while they struggle to cope with all that it means, they will be spending more and more time together.

Now Corrie boss Iain MacLeod had said how these relationships will be tested with the former couple brought back together.

Speaking at a press day this week, MacLeod explained: “When Steve and Leanne learn that their son has a life-limiting condition, we explore how that impacts on their relationships with their other loved ones.

“Obviously Steve and Leanne are not currently a couple, but this story will draw them closer and closer together – to the point where they are bonded more tightly than they’ve ever been.

“The difficulty then for Nick, Tracy and other people is that they start to feel slightly shut out from that little triangle of Steve, Leanne and Oliver.”

He added: “It makes you the worst person in the world if you express that, so the difficulties for Tracy and Nick are to try and find the best way through for the person they love – while simultaneously feeling left out in the cold slightly.

“It’s a really complicated, emotional family story at its core.

“In the end, it will leave everybody permanently changed by it but also stronger for it.

“Once they’ve been through the fire, these relationships that have been tested by this extreme adversity will be much, much stronger.

“They will be life-long relationships.”

Mitochondrial disease, or ‘mito’, is a group of medical disorders caused by mutations in mitochondria.