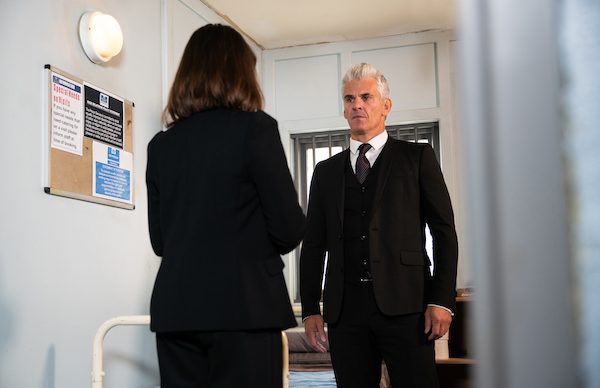 Coronation Street SPOILERS: The net closes in on Robert

Is he going to prison for murder?

Robert Preston finds himself facing a long jail sentence in next week’s Coronation Street as the evidence for Vicky Jefferies’ murder starts to stack up against him.

Robert has found himself in a whole world of trouble since he was accused of Vicky’s disappearance on his wedding day to Michelle Connor.

But while Robert is adamant that he is innocent, the finger of blame is pointing so firmly at him that even the police seem to think he is guilty.

Next week sees Robert return from being questioned by the police, only to break the news to Paula that the sat nav on his van confirms he was at the woods where the police think Vicky’s body has been dumped.

But Robert is sure that he has never been to the woods, and Paula starts to wonder if anyone else might have had access to his van.

However, it seems the police are determined to pin Vicky’s vanishing act on Robert, because he is soon taken in for questioning again.

This time the police grill him and Michelle separately on Robert’s violent temper, and Michelle tells them about incidents from the past, including his steroid abuse.

Things are looking bad for Robert as the police reveal to Paula that they intend to charge him for assault… and Robert is left reeling when Paula confesses that if Vicky doesn’t show up soon then things are about to get a lot worse.

But while Robert is desperately trying to prove his innocence, Michelle is focusing on her future and has put the Bistro up for sale.

It doesn’t take long for a woman to arrive representing an anonymous buyer, but Michelle is annoyed when they offer half the asking price.

However, Carla points out how desperate Michelle was to get rid of the Bistro and move forward… and Michelle eventually instructs Adam to accept the mystery buyer’s offer.

But who is going to be the new owner of the restaurant?

As Robert waits in his cell, preparing himself for his time in court, he is stunned when Paula arrives and tells him that some new evidence has come to light that could change everything.

But what has happened? And will this new twist spell jail or freedom for Robert?

Do you think Robert is going to jail? Leave us a comment on our Facebook page @EntertainmentDailyFix and let us know what you think!