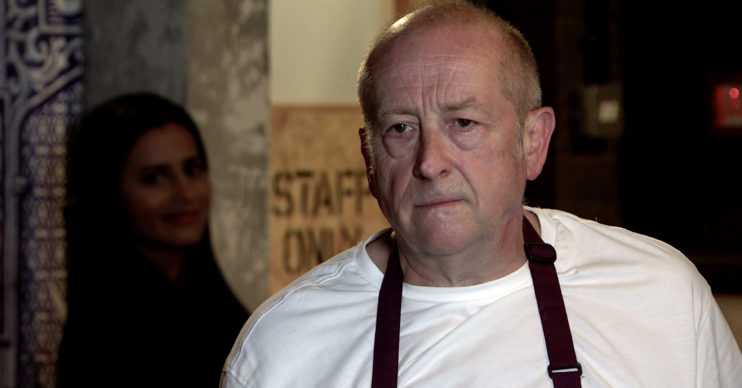 Coronation Street SPOILERS: Geoff Metcalfe learns his fate tonight after being carted off by police

Is there enough evidence to convict him?

Geoff’s ongoing abuse of Yasmeen came to a head after Tim disowned him and he was led away by police.

What happened to Geoff Metcalfe?

Tim had refused to believe that Geoff was an absuser, despite the claims of Sally, Alya and Yasmeen herself.

But confronted with irrefutable evidence, Tim decided to call the police.

Sally had got hold of Geoff’s laptop, and she and Faye discovered old footage of Geoff abusing Yasmeen.

When Tim saw his father push a telephone into Yasmeen’s face and constantly belittle her, the penny dropped.

He realised what kind of man his dad really was.

How did Geoff try to get out of it?

Realising Sally had taken his laptop, Geoff headed round to her place to retrieve it.

Soon, Tim revealed that he had seen everything.

With Geoff squirming and trying to justify his actions, Tim called him a bully.

When he opened the door and showed the police in, he said to a shocked Geoff: “We’re finished, go on, get out of my house.”

In tonight’s episode of Corrie, heartbroken Tim has to come to terms with what happened and track down missing Elaine to make sure she’s okay.

But spotting him, Geoff rushes over to confront him.

That begs the question: what happened to Geoff at the police station and is there enough evidence to convict him?

Tim returns from Bolton and tells Sally, Alya and Imran that there was no sign of Elaine.

What else is happening in Coronation Street tonight?

Elsewhere, Nick, Leanne and Steve prepare for their break in Cornwall.

They’re interrupted by the sound of Oliver’s seizure alarm, meaning that they have to rush the tot – who suffers from mitochondrial disease – to hospital.

Soon, the doctor breaks the news to Nick, Leanne and Steve that Oliver’s been moved to intensive care and put on life support.