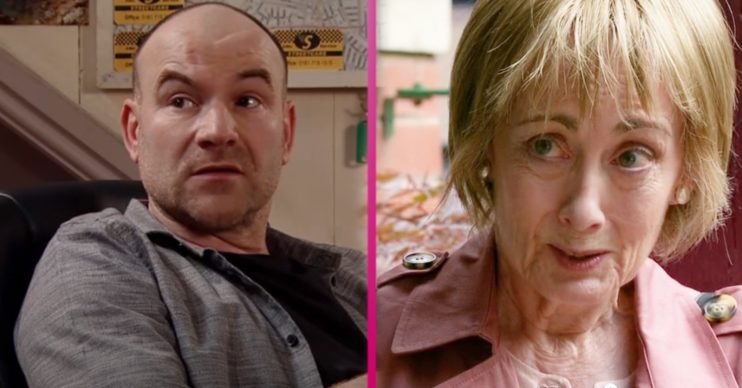 Elaine has been missing for a few weeks

A couple of weeks ago, a woman named Elaine introduced herself to Sally and Tim revealing she’s the first wife of abusive Geoff and Tim’s biological mum.

As Tim still believes his dad is innocent, he refused to believe Elaine. But it looks like he will soon change his mind…

In next week’s Corrie episodes Tim and Sally are still at loggerheads over Geoff. But Geoff assures his son that he is innocent and a weary Tim believes him.

Meanwhile Sally confides in Cathy about the CCTV and Cathy tells her any footage will be on Geoff’s laptop.

Coming up with an idea, Sally tells Faye she wants to get a book for Yasmeen so she can get the keys to No.6. Seeing the laptop she puts it in her bag just as Geoff returns.

Will he believe her reason for being there?

Having escaped the house, Sally shouts for help and a bemused Tim takes her home. She tells her husband she took the laptop and with Faye’s help they try to download the deleted camera app and the footage.

Later the police arrive at No.4 and tell Geoff new evidence has come to light and they need to ask more questions.

A heartbroken Tim is worried about Elaine’s safety and decides to try and track her down.

Having spotted Tim, Geoff hurries over. But what does Tim have to say to his dad?

Later Tim returns for Bolton and tells Alya, Imran and Sally what he found. He reveals there was no sign of Elaine and judging by the pile of post on her mat, she’s not been home in a while.

Tim tells Alya how sorry he is that he failed to see she was right about Geoff all along.