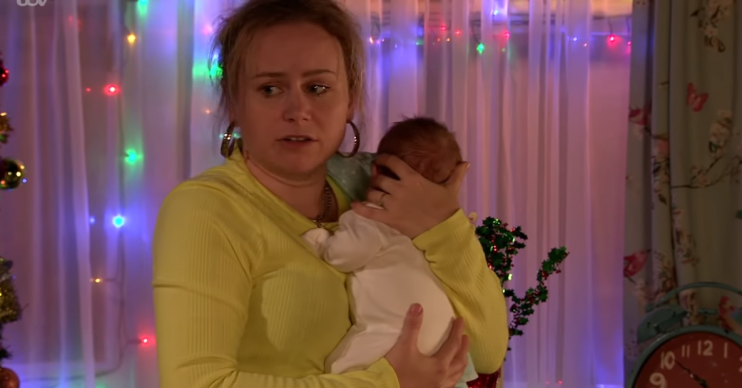 Coronation Street SPOILERS: Heartbreak for Gemma and Chesney as Aled is diagnosed as deaf

There will be tough times ahead for the young parents

It looks like there are a troubled few months ahead for Gemma Winter and Chesney Brown when one of their quads is diagnosed as being deaf in Coronation Street.

The new parents are already struggling with the pressure of bringing up four babies, plus Ches’s son, Joseph, and this latest development will add extra stress to their already chaotic lives.

According to The Sun, medical tests will confirm their son, Aled, cannot hear.

A source told the publication: “It’s going to be heartbreaking for Gemma and Chesney to realise baby Aled has hearing problems.

“The hope is that the storyline will raise awareness of how a family can cope with the diagnosis.

“It will show how the family and doctors can help ensure Aled will lead as normal life as possible as he grows up.”

Bosses are said to be keen to make the storyline as accurate as possible and have taken advice from Trafford Deaf Children’s Society and Great Ormond Street hospital.

A Coronation Street spokesperson told The Sun: “This is a very important story to tell and will resonate with many parents who have gone through their children being diagnosed with hearing problems and the challenges that this throws up for the child, the parents and the whole family.”

Gemma and Chesney have always been committed to doing the best they can for their children.

When they first found out they were expecting quads, the couple were offered selective termination, but chose to give all of their babies a fighting chance at survival.

Gemma gave birth last year while stranded in a cable car in Wales.

She had Aled up in the air (hence his name!) and was then rushed to hospital to welcome the other three babies: Bryn (named after the surgeon who delivered him), Carys (one of the paramedics alongside Aled), and Llio (after the midwife).

It soon became clear raising four babies would take a lot of money, so the couple accepted an offer from Freshco supermarket to be the face of their brand.

When Gemma and Chesney attended a photoshoot with their babies, the exhausted parents ended up falling asleep in the green room.

Once they arrived back in Weatherfield, Chesney’s boss, Dev, was furious that Ches was late for work and ended up sacking him.

Although Dev gave Chesney his job back, he fired him again when a reporter got involved in the story.

Gemma and Ches were later upset to discover Frescho had used a set of actors to play the quads’ parents in the ad campaign, but were forced to agree to the deal after Chesney lost his job with Dev.