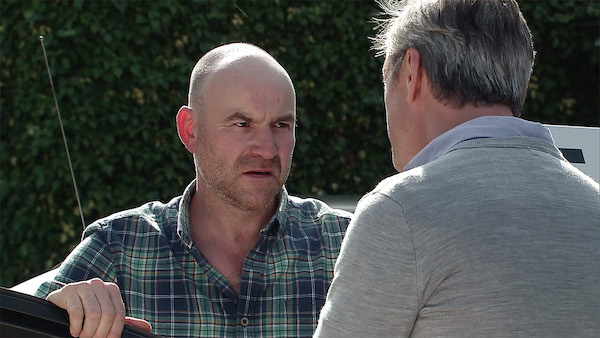 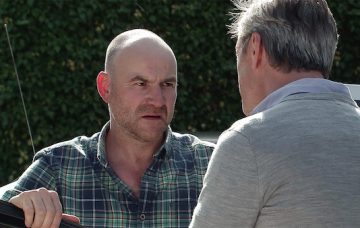 Just how far will Tim go to get justice for Sally?

Tim Metcalfe is a man on a mission, desperate to get Sally home where she belongs. But as he continues to dig for dirt of Duncan Radfield, things take a sinister turn when someone’s life ends up hanging in the balance…

With Sally no closer to coming home thanks to Duncan framing her for fraud, Tim, Sophie and Gina are all more determined than ever to prove she is innocent.

But without a confession from the man himself, it looks like Sally could be spending the foreseeable at Her Majesty’s pleasure.

When Imran summons Duncan to his office to go over a few things, Gina uses this as her moment to get into Duncan’s home and dig for clues.

She manages to get in his flat while the coast is clear, but it’s not long before evil Duncan comes home and she is forced to hide under the bed.

Thankfully, Tim is also following Duncan, and finds himself hammering on his front door after following him home from Imran’s office.

So as Duncan gets distracted by Tim at his door, Gina seizes the moment and escapes out the window.

But all is not lost, because after everyone has gone, Gina continues to spy on Duncan and watches him leave his house and walk down the road to make a call from a phone box.

After he has hung up and disappeared back home, Gina nips into the phone box and redials the number Duncan just called… but what will she find?

While whoever Duncan had been on the phone to remains a closely guarded secret, it seems that it has helped with their case to free Sally, because the next day Tim makes a statement to the police about what Gina has discovered.

However, Tim and Gina’s glee doesnt last kong when the police arrive at number 4 and tell them that even though their detective work has helped Sally’s case, without an actual confession from Duncan, there isn’t a lot they can do to free her.

Sally’s nearest and dearest aren’t about to give up that easily though, and they come up with a plan B to get what they need from Duncan.

Sophie and Tim lure Duncan’s daughter Olivia to Speed Daal, thinking they might be able to get information from her instead.

And it seems whatever they say to Olivia has worked, because later on she can be seen angrily calling her father – only for him to turn up at the restaurant.

Tim confronts Duncan when he arrives, but the crook plays it cool and steers his daughter out of the restaurant. But it is clear Tim has hit a nerve with what he has said.

Desperate not to let Duncan get away when they have come this far, Tim follows his nemesis home, deciding that if he has to he will beat the confession out of him.

But when Tim catches up with him tragedy strikes when he lunges at Duncan, causing him to take a step backwards into the road, and get hit by a passing car.

Will Duncan live to confess that he framed Sally?

Do you think Tim will ever get a confession from Duncan? Leave us a comment on our Facebook page @EntertainmentDailyFix and let us know what you think!