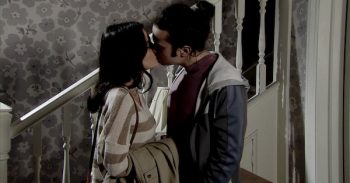 Coronation Street SPOILER: Seb and Alina spend the night together

Seb Franklin finds himself growing closer to his new flame Alina next week, but little does he know he’s about to get himself into some seriously dangerous waters.

It has been reported that Coronation Street will be exploring a new storyline that centres around the subject of human trafficking this year, and Seb is set to be in the centre of the drama.

The builder who is now working as a handyman has found himself falling for pretty Alina who he met while working on a job in a nail bar.

But it is clear that not all is as it seems with Alina.

Seb was left confused when she bolted after seeing Eileen with Jan recently, but just how does Jan know Alina?

Next week Seb finds out that Alina has moved to a new nail bar and sets about tracking her down.

But while Alina is pleased to see him, she is also nervous of her boss, Rachel, and is worried that she will be angry about Seb hanging around.

Seb offers to make himself useful while he is there and suggests putting up a shelf in the salon, but it’s just an excuse to hang around for a bit longer, and he’s clearly falling for Alina hook, line and sinker.

Alina meets up with Seb after work and the pair get on like a house on fire, but their evening comes to an abrupt end when Alina says she needs to get back as she has got things to do.

Seb is left bemused as she hurries away, but doesn’t think too much of it. And when she calls at number 11 the next day, explaining that the electricity is out at work, he is thrilled when she suggests they spend the day together.

As things go well, Seb suggests that they spend the night together, and Alina is over the moon.

But her mysterious behaviour continues when she says she has a few things to sort out before she can stay and tells him she will be back at 10.30pm.

The pair spend the night together, and the following day they can’t help but look totally loved up.

But as Seb walks Alina to work, the fact that they’re five minutes late doesn’t go down well with Rachel and she makes it clear that Seb isn’t welcome at the salon. But why?

Later Alina comes to see Seb and apologises on behalf of her boss, explaining that she is one of the lucky ones that she looks after because she has got a job and a roof over her head.

Seb admits that he doesn’t like the way that Rachel treats her and vows to take care of her from now on. But as the pair kiss, is Seb unwittingly getting himself into dangerous territory?

Do you think Seb and Alina make a good couple? Leave us a comment on our Facebook page @EntertainmentDailyFix and let us know what you think!