Coronation Street fans have slammed the soap over its ’embarrassing’ episodes last night.

They have threatened to switch off if producer Iain Macleod isn’t replaced after the episode saw the death of a character no-one remembered.

Mary Taylor was upset when she was told her ex-boyfriend, Brendan, had died when she thought she was reuniting with him.

But in bizarre scenes, she instead began talking to a Robin, thinking he was Brendan – and the attempt at humour left viewers furious over the soap’s ‘decline’.

Read more: Coronation Street viewers are getting fed up of “annoying” Geoff Metcalfe

One raging fan said: “I’m done. What has happened to this show?! It’s like a local Am Dram farce! It’s insulting.

“I remember this happening in the mid-ninties; it took a while to recover. A swift change of producer required! #Corrie”

A second said: “This week has been the worst of any episodes I can ever recall watching. Embarrassing. The only saving grace in tonight’s was the fact there was no Gemma.”

A third said: “C’mon #Corrie get your act together. How can something so good go so bad. I’m giving it two weeks then stopping watching if no improvement.” 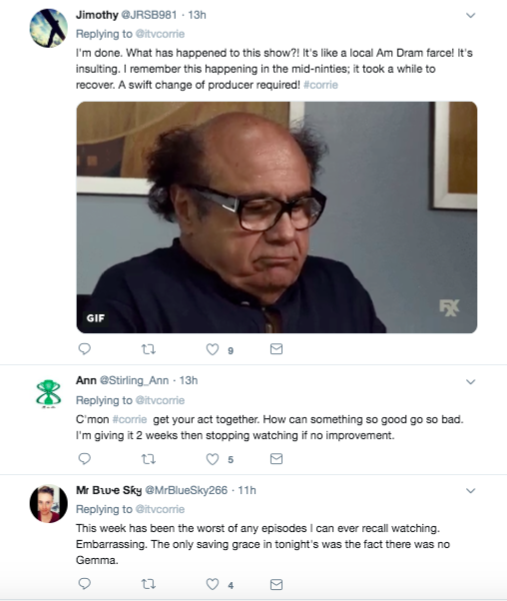 Another agreed, adding: “Seriously… it’s utter crap lately, dreadful… so ridiculous. Was my favourite soap but not lately…”

A fifth said: “The show has really hit the skids. The dire attempts at humour with Dev, Steve and Tim? We used to have Blanche Hunt’s withering wit.”

The fact most viewers didn’t remember Brendan, who appeared for a handful of episodes years ago, was singled out for particular mocking.

One said: “RIP Brendan. Unfortunately I don’t remember you #Corrie.”

Another said: “Just seen a picture of Brendan and I still can’t remember him #Corrie.”

The poor reaction from viewers comes after it was revealed the soap had lost its crown atop the ratings and was beaten by Emmerdale.

Seven stars were also reported to have quit the show amid the crisis , with fans blaming producer Iain.

Do you think Corrie’s in crisis? Leave us a comment on our Facebook page @EntertainmentDailyFix and let us know what you think!