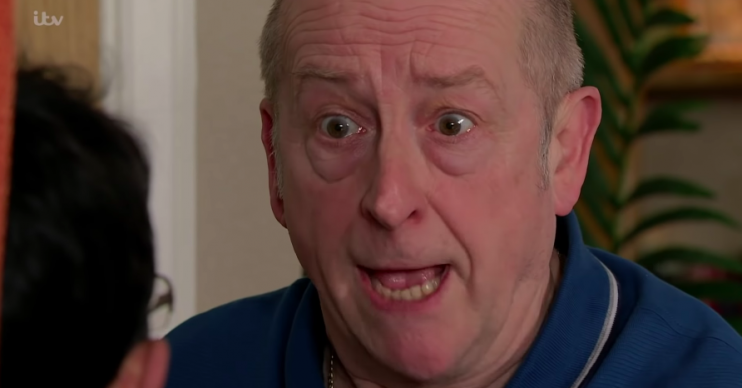 Fans of Coronation Street are horrified after Geoff Metcalfe turned violent with Yasmeen Nazir and stopped her from leaving the house.

Controlling Geoff couldn’t control himself in last night’s episode (April 3) after Yasmeen insisted on going to her grandson Zeedan’s wedding.

She had discovered he had lied about having a heart attack and booking a five star hotel for them for the wedding and decided she was going alone.

But as she tried to walk out, Geoff begged and pleaded with her not to go.

He used every trick in his control armoury to get Yasmeen to stay but when it failed he turned nasty.

Geoff violently pushed her back and blocked the door.

He stood over her and said: “You’re going nowhere.”

Fans were horrified with one saying: “Can’t watch Geoff and Yasmeen anymore it’s making me so angry.”

A second said: “So Yasmeen finally stands up to Geoff and then at the last minute he stops her from leaving.. hate to think what he’s gonna do to her. #Corrie.”

A third added: “Can’t believe how on edge @itvcorrie Geoff and Yasmeen story line makes me.”

Shelley’s worries over the rise in domestic abuse

It comes as actress Shelley King has told how she worries domestic abuse will rise during the coronavirus lockdown.

In an interview with the Metro, she said: “I was really worried about the news articles that domestic abuse cases are rising during the coronavirus lockdown.

“People are locked together – I don’t know quite how to approach that but the National Domestic Abuse helpline is 24 hour resource and can be called on 0808 2000 247.

“I’ve heard many stories since this story started – people have told me about relationships with their own partners, some of which they’re still in.

She added that she thinks “it is an opening conversation” and they “get a lot of messages from people”.

What do you think Yasmeen should do? Leave us a comment on our Facebook page @EntertainmentDailyFix and let us know what you think!