Viewers of Coronation Street have turned on Steve McDonald for threatening to have Dr Ali struck off. 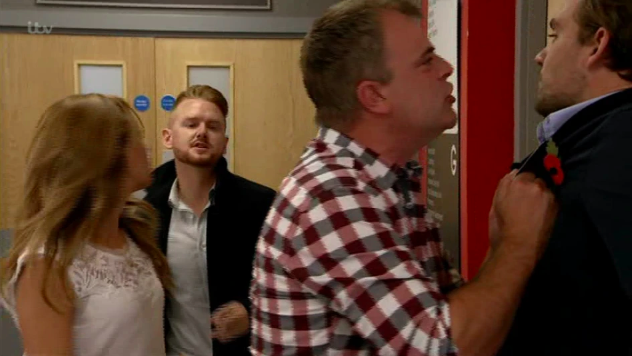 Steve grabbed Ali while he was shouting at him (Credit: ITV)

She was later rushed to hospital when her condition became serious leaving Steve and her flatmate Maria panicking for her.

When Ali heard he rushed to the hospital to see how she was doing and Steve decided to blame him for Emma's predicament - enraging fans who pointed out he had hardly been a father to Emma before.

"My daughter could have died because of you," Steve shouted at Ali.

But as the doctor tried to explain how he didn't know the extent of Emma's pain because she didn't tell him, Steve cut him off.

He shouted: "It's your flipping job to know, she's got a ruptured appendix, why didn't you help her?

"Why didn't you send her to hospital? You didn't even examine her. What did you actually do?

"I'll tell you what you did - nothing - because you're flipping negligent."

Grabbing Ali, Steve smelled the beer on his breath from his day off and accused Ali of being drunk when he dealt with Emma.

"And you stink of booze," he said. "Were you drunk this morning when you saw Emma or were you mooning over your ex?

"This isn't over, you are not fit to be a doctor. I'm going to make sure you are struck off and I'm going to take you to court and sue you for everything you've got in case you nearly kill someone else's kid."

A second said: "Suddenly Steve is #peterandre in the father stakes? About 20yrs too late I think. #corrie #coronationstreet"

A third said: "Why is no one defending Ali? She was [expletive] HIDING the extent of her symptoms. #corrie"

What did you think of Steve's outburst? Leave us a comment on our Facebook page @EntertainmentDailyFix and let us know what you think!