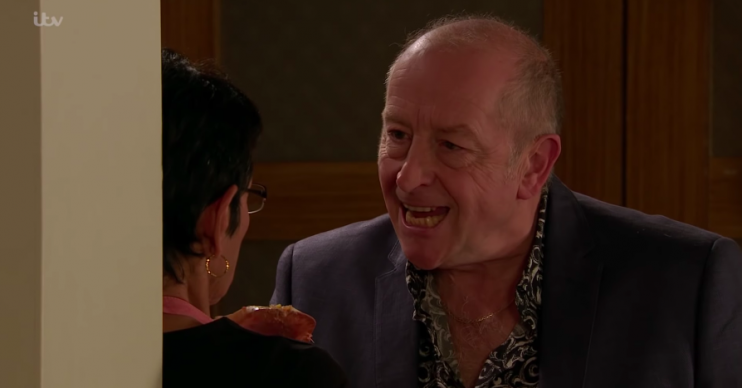 Many viewers declared they’d had to switch the ITV soap OFF because they found the storyline so distressing.

After forcing wife Yasmeen to become his housework slave, evil Geoff then wrongfully accused her of being an alcoholic.

Physically sickened by this storyline. It goes on I know, but can’t bare to watch it.

On Wednesday (January 15), viewers were aghast as Geoff’s gaslighting behaviour took on new heights when he tried to persuade Yasmeen that she’s an alcoholic.

Over the past year, Geoff has been hacking away at Yasmeen’s self-confidence with his coercive behaviour – cutting her off from her friends, spying on her and ridiculing her.

In upsetting scenes, Geoff checked Yasmeen had done the housework to his satisfaction, before suggesting she had a drink problem!

Showing how deeply he has manipulated her, Yasmeen started to agree that she was out of control and promised that she would work on herself.

As she promised to cut out her drinking, Geoff asked her to hand over all of her bank cards so she isn’t tempted to buy alcohol when she is out.

Luckily both Cathy Matthews and Brian Packham have started to have their suspicions about Geoff’s controlling behaviour, but some fans have begged the storyline to end NOW because it’s so upsetting.

Writing in Twitter, one said: “Physically sickened by this storyline. It goes on I know, but can’t bare to watch it.”

Another said: “I really don’t want to watch @itvcorrie anymore if all we see is Geoff’s awful manipulation of Yasmeen!”

A third added: “This awful storyline is enough to make me switch off.”

Something needs to happen soon, I’m at the point of stopping watching, it’s sick

So annoying, switched off

“Can’t watch Corrie at present. The domestic violence and abuse storyline is way too traumatic and makes for feeling dreadful,” said one more, while another typed: “I’ve stopped watching because of Geoff.”

“Actually can’t watch it anymore while this storyline is going on,” said another. “I know it happens and it’s awful, I just find it too uncomfortable to watch at the moment so will watch again when it’s done.”

Another said: “This storyline is making me uncomfortable but it has to be told because there are people living in abusive relationships.”

Such a hard storyline to watch but VERY real x

Awful to watch for people who have or are still going through it – he's a brilliant actor cos he's making my skin crawl and stomach clench!

A third added: “The storyline is highlighting mental/emotional domestic abuse! In reality it goes on for years. Instead of criticising, take note and be aware!”

“Such a hard storyline to watch, but very real,” said one more, while another added: “I love that people seem to think that there’s a comfortable way of showing abuse in a relationship. Ignore the whiners Corrie – you’re doing this story more than justice.”

Many others have called for Geoff to be killed off.

What do you think of the Geoff/Yasmeen storyline? Leave us a comment on our Facebook page @EntertainmentDailyFix and let us know what you think!