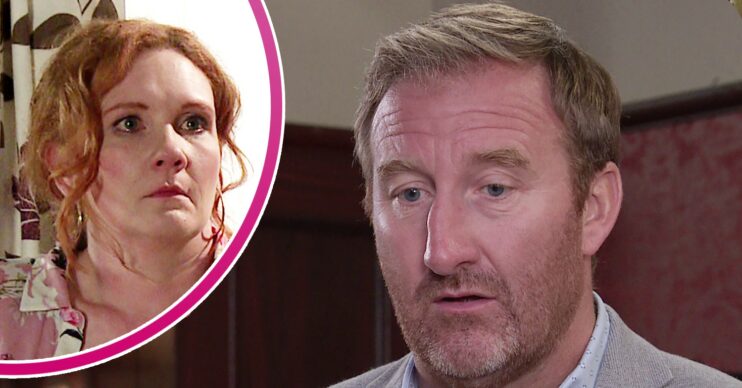 Phill is refusing to give Fiz and annulment

Coronation Street fans have begged for the soap to bring Fiz and Phill’s storyline to an end.

Fiz has been trying to get an annulment from husband Phill since she broke up with him at their wedding reception.

However it looks like he won’t be signing the annulment forms now he knows Fiz is back with Tyrone.

Earlier this month Fiz and Phill got married. However at the reception she ended up dumping her new husband, saying she didn’t love him.

She then left the celebration and told her ex-fiancé Tyrone that she still loved him and wanted to be with him.

The next day, Phill came to see Fiz begging for another chance.

He also told her if she had dumped him for Tyrone, he couldn’t go through with an annulment.

For a while Phill tried to win her back, but it became clear his plans weren’t working.

Fans beg for soap to bring ‘stupid’ storyline to an end

Last week, Phill started to realise Fiz didn’t want to be with him and agreed to give her an annulment.

However he asked that she attended a couples therapy session with him, just to be sure their relationship is over.

When they went to see the therapist, Fiz was horrified to see she was the same therapist that had been seeing her and Tyrone.

She encouraged them to be honest with Phill, however he found out the truth for himself when he came back to the therapist’s office looking for his phone and saw Fiz and Tyrone having their therapy session.

He was devastated, but after a chat with Evelyn it looked like he would sign the annulment forms.

As he went to No.13 to say his goodbyes to Fiz’s children Hope and Ruby, Hope apologised for trying to ruining the wedding.

But she also let slip that Fiz stayed at No.13 with Tyrone on their wedding night, leaving Phill furious.

He went to the Rovers and found Fiz and Phill having a celebration.

He tore up the annulment form, telling Fiz he knew where she spent their wedding night.

Phill then said that he would be filing for a divorce in 12 months, leaving Fiz and Tyrone worried.

But fans are getting fed up with the storyline and are begging for it to finally come to an end.

Please put us all out of our misery soon over this stupid Phill storyline. #corrie

@itvcorrie It's a stupid storyline. Fiz can request the marriage be void right now. If she waits she'll be asked why. Phill's an idiot they'll ask why won't you sign "She slept with another man on our wedding night" Not you then? VOID! He's such a drip! #Corrie #CoronationStreet pic.twitter.com/L5fuDZWJJ4

The whole Phill storyline lurches from one absurd, pantomime scene to another. On every level it's just a ludicrous insult to the audience. I call again for ITV to replace #IainMacLeod. #Corrie #itv

After dragging out the Phill storyline, it feels like they didn’t know how to end it. Bit of a damp squib. #corrie

This fiz and phill storyline is getting boring now #Corrie

What do you think of this storyline?