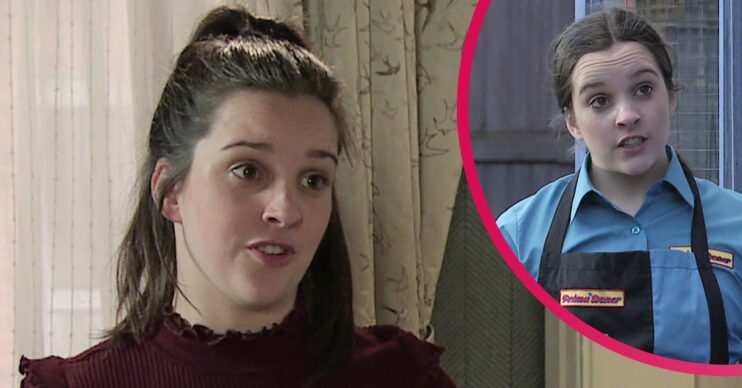 Elle has played Amy since 2010

The actress appears to have had some of the length taken off from her usually straight brunette locks, had some blonde added in and had her hair curled.

Elle posted three pictures to her Instagram, including a pic of her in the salon chair.

Kimberly Hart-Simpson, who plays Nicky Wheatley commented: “Why she so cute” with a flame emoji.

Elle has played Amy since 2010 and recently Amy has been at the centre of a huge storyline.

Last week, Amy told her parents Steve and Tracy McDonald that she has got back together with former drug dealer boyfriend Jacob Hay, leaving them unimpressed.

After Jacob got into an altercation with Amy’s cousin, Simon, Steve forced her to choose between her family and Jacob.

Amy decided to go and live with Jacob.

In tonight’s episode (Monday, March 21 2022) Amy shows Ken the budget she’s drawn up and asks if he’ll release the money from Deirdre’s trust fund to pay for her degree.

Ken agrees but as he goes to send her the money, Steve begs him to reconsider.

What will Ken do?

Later Steve isn’t happy when he sees Dev has given Amy a job at the kebab shop, pointing out she’s now living with Jacob, the guy who sold drugs out of the chippy.

Will Amy lose her job?