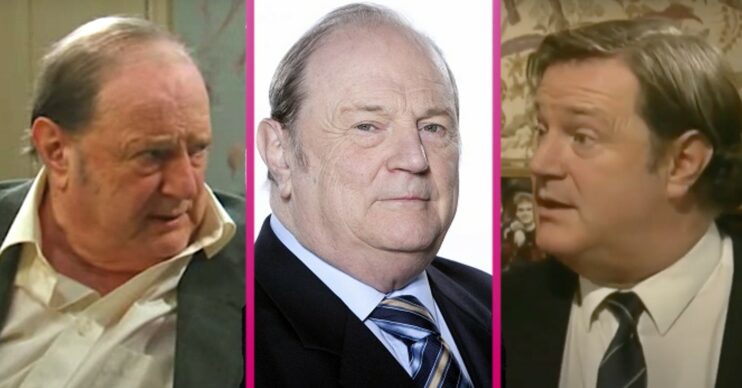 Alan Turner in Emmerdale: Who was he? Does he still have relatives in the village?

He swapped business suits for beer when he took over the reins at The Woolpack.

Alan Turner in Emmerdale was the scheming businessman and local councillor turned friendly landlord of The Woolpack.

He ran the legendary pub for more than two decades, seeing highs and lows in his time behind the bar.

Who played Alan Turner in Emmerdale?

Alan Turner in Emmerdale was played by veteran actor Richard Thorp. He had roles in Crossroads and Emergency Ward 10, before he joined Emmerdale in 1982.

After the death of Clive Hornby, who played Jack Sugden, he became Emmerdale’s longest-serving cast member. Richard said he knew he could have moved on, but he had no regrets about staying because he was lazy!

Richard passed away, aged 81, in May 2013 and his last scenes were screened as a special tribute episode.

Alan and his wife Jill came to Emmerdale in 1982. Alan was a businessman back then, who was frequently outwitted by Joe Sugden and Seth Armstrong.

His marriage to Jill broke up a few years after they arrived, and he married Shirley Foster in 1994, though he was heartbroken when she was shot in a siege at Home Farm and died just a few months later.

Alan took over the reins at The Woolpack in 1991 and immediately took to his new job, softening from his scheming past in business and local politics and instead becoming a friend to the villagers.

In the late 1990s, Alan’s grand-daughter Tricia Stokes arrived in the village. She began working in the pub alongside her grandfather and the two became very close.

Read more: Marlon Dingle in Emmerdale: Who is the real love of his life?

She and Alan weren’t such good friends, but they grew closer after Tricia died tragically in a storm.

Alan Turner and his children

Steph’s friend Shelley arrived in the village and began dating Alan. But Steph wasn’t keen on having to share her dad’s attention. She told Alan that Shelley was only after his money and Shelley left.

Alan began drinking, and fell down the stairs. Steph looked after him but was secretly drugging him and even tried to drive them both over the edge of a quarry!

When Shelley disappeared, Steph was suspected of murdering her. She even went to prison for a while. But Shelley showed up at the memorial service, getting Steph off the hook.

She would have regretted her decision later, though, when she fell overboard from a funeral and Steph left her to drown.

Steph later told her dad that she had been sexually abused by her brother, Terence. Alan was horrified at the allegation and chose to believe his son instead of his daughter, which was devastating for Steph.

When Terence admitted it Alan threw him out, but a row between the siblings led to Terence’s death.

Steph felt terrible about her role in another death, was sectioned for a short while and eventually confessed to both murders. She’s now in prison for life, though she returned under guard for her dad’s funeral.

After all the drama, Alan settled back down into village life. He spent some time away, travelling with his friends, and eventually headed to France on his motorbike.

He returned, unseen, and his good friend Betty Eagleton found he had passed away in his sleep.

Later Betty commented that life in the village wasn’t the same without Alan and her partner Seth Armstrong.

With Alan’s two children, and only grandchild all having passed away, there are none of his relatives left to return to Emmerdale. But we’re happy that the former Woolie landlord still gets a mention every now and then.