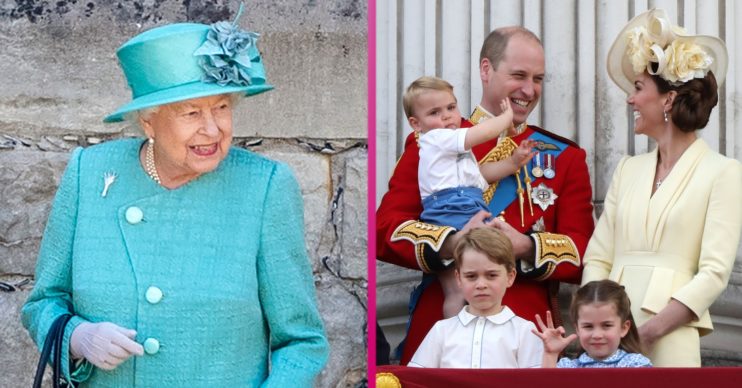 The Queen is ‘finally reunited with Prince William, Kate Middleton and children’ after months away in lockdown

The Queen has reportedly reunited with Prince William, Kate Middleton and their three children over the weekend.

The Monarch, 94, was forced to stay away from her family for months in lockdown.

Her grandson, Kate and her three great-grandchildren, George, Charlotte and Louis reportedly took the trip up to Scotland to see Her Majesty.

The Queen moved to her summer residence at Balmoral earlier this month with Prince Philip.

The Queen is reportedly thrilled to be reunited with her family

A source told The Sun that both parties are “over the moon” to finally be able to spend time together.

However, the source also claims they committed to maintaining social distancing throughout the visit.

The source said: “Like every family, they’ve been desperate to get back together and over the moon it was possible this weekend.

“They’ve all been up there for a few days and although there are very strict procedures with social distancing, they’ve been able to find ways of seeing each other outside.

“It’s obviously been a difficult year for the Queen and Duke of Edinburgh seeing the country dealing with the pandemic, so they were all keen to go there to show their support.”

They were separated for months due to lockdown

The Queen and Philip, 99, spent almost five months in lockdown at Windsor Castle.

Here they were served on a shoestring of 24 royal servants who isolated with them.

Despite this restrictive time, the Queen continued many of her royal duties.

Read more: Princess Diana statue to be officially unveiled on her 60th birthday

She continued to make phone calls to charities and the government.

Princess Anne even showed her how to make Zoom calls.

And she made the highly commended broadcast speech, ‘We Will Meet Again’, back in April.

Princess Beatrice’s wedding to Edoardo Mapelli Mozzi even took place at the chapel in Windsor Castle so that the Queen and Philip could attend.

Philip reemerged from his retirement during this time to pass his role of Rifles Colonel-In-Chief to Camilla Duchess of Cornwall.

Now in Balmoral, Elizabeth and Philip are likely able to enjoy some much needed respite.

Said to be The Queen’s favourite residence, it is a huge country estate that spans some 50,000 acres.

Princess Eugenie said during the ITV documentary Our Queen at Ninety: “I think Granny is the most happy there. I think she really, really loves the Highlands.”