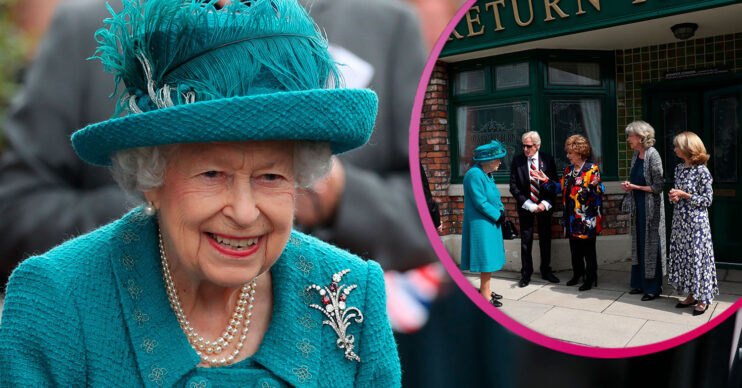 The Queen in Manchester today as she visits Coronation Street set

Her Majesty was all smiles during the visit

The Queen is in Manchester today as she made a visit to the Coronation Street set.

Her Majesty, 95, looked radiant in blue as she spoke with the soap’s stars William Roache, Barbara Knox, Sue Nicholls and Helen Worth on the set at Media City UK.

The Queen listened to the actors as they spoke about how the coronavirus pandemic impacted filming of the soap.

The Queen in Manchester as she visits Coronation Street set

Meanwhile, the monarch visited where the interior of the Rovers Return is located on set and met more of the cast.

As the Queen arrived on the cobbles, a red carpet was laid out.

What did the Queen say?

During the chat with William, Barbara, Sue and Helen, the Queen told them: “I think it’s really quite marvellous that you’ve been able to carry on.”

Royal fans expressed their delight at seeing the Queen on the Corrie set.

One person said on Twitter: “The Queen visiting Coronation Street and meeting Ken, Rita, Audrey and Gail is not what my football-wrecked emotions needed today…

Another wrote: “I am obsessed with the fact the Queen went to the Corrie set.”

The Queen has had a busy few weeks and recently returned from her Scotland tour.

Princess Anne and Prince William joined the Queen for some engagements.

After the tour, Her Majesty attended the Royal Windsor Horse Show and looked in high spirits.

Earlier this month, a royal expert said the Queen is living life to the full after losing her husband Prince Philip in April.

And here is the Queen walking off the cobbles to the famous Coronation Street theme tune playing in the background pic.twitter.com/cZYtkiUSCq

The Queen ‘living life to the full’

Phil Dampier told the Daily Mail: “I’m sure she was devastated by his passing – after all they were married for 73 years. But I’m sure that he told her to enjoy what was left of her own life.

Read more: The Queen’s best and most adorable outfits during her tour of Scotland

“…and I bet he would want her to carry on living life to the full.”