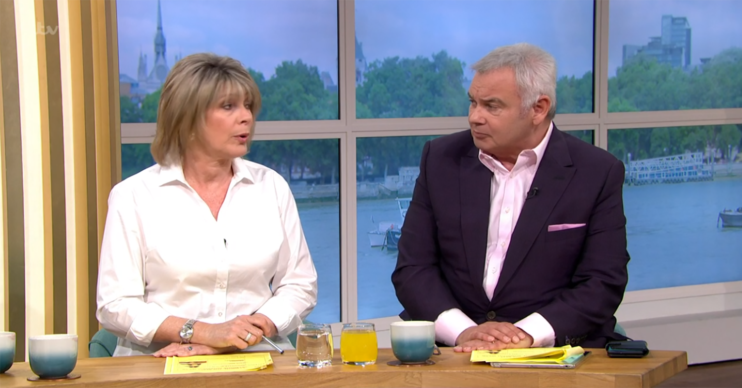 She uses asparagus to predict the future

Eamonn Holmes and Ruth Langsford had some rather surprising news regarding Prince Harry and Meghan Markle on This Morning today.

They showed a maypole dancer in action, then told viewers that May 1 is also the start of National Asparagus Month.

That introduced Jemima Packington to the show.

She predicts future events using the power of asparagus. Yes, you read that right.

Read more: This Morning viewers complain as Phil Vickery sends food to the studio amid lockdown

Firstly, she shared a shot of a piece of asparagus thrown onto a towel.

Then, Jemima told the presenters to expect a very Royal interview soon.

She said: “Can you see there are two initials first of all? H and an M in the centre.

“I would suggest that the H and M have great significance and maybe it’s an interview with the Sussexes for you.”

That took Ruth and Eamonn by surprise.

“An interview with Harry and Meghan, that’s what everyone wants.”

Jemima then went on: “The two spears coming towards you at the front of the picture also show great joy coming into your lives, connecting with relatives. Double celebration.”

Ruth responded: “An interview with Harry and Meghan, that’s what everyone wants.”

But Eamonn seemed to take it all with a pinch of salt.

“Lucky them,” He drily replied.

Meghan and Harry quit as senior royals at the end of March.

It is fair to say their relationship with the media has been fraught, as the couple wrote to British tabloids last month to say they would no longer work with them.

They blamed “distorted and invasive” stories for the decision.

It remains to be seen whether they feel the same way about TV – perhaps a This Morning interview would help them to set the record straight.

Do you think Meghan and Harry would ever do a sit-down chat on This Morning? Would you watch if they did? Go to our Facebook page @EntertainmentDailyfix and leave a comment to let us know what you think.