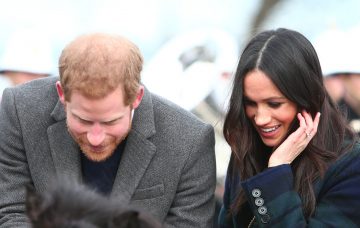 Prince Harry and fiancée Meghan Markle have made their first official visit to Scotland as a couple.

The engaged couple were greeted by hordes of cheering fans in Edinburgh on Tuesday afternoon as they arrived at Edinburgh Castle ahead of watching the One O’Clock gun being fired.

They were also welcomed by a gorgeous pony, who was dressed to impress.

According to PA, the beautiful regimental mascot Shetland pony’s name is Cruachan IV.

He was joined by Pony Major Mark Wilkinson in greeting the royal couple.

They’re also due to visit the Social Bite sandwich shop, which helps provide food for the city’s homeless population.

Meghan kept warm in a green and black tartan coat from Burberry… but sorry if you’re a fan of the look – it will set you back a whopping £1,995! Eek!

She wore trousers by Veronica Beard and carried a handbag by Strathberry, a luxury Scottish brand.

Harry, 33 and Meghan, 36, travelled to Scotland just a day after Kensington Palace announced further details for their May wedding.

The couple will marry at midday at St. George’s Chapel at Windsor Castle on Saturday, May 19.

They’d previously said they wanted members of the public to feel involved in their big day and, staying true to their word, they’ll undertake a carriage ride through Windsor at 1pm after tying the knot.

A statement said: “They hope this short journey will provide an opportunity for more people to come together around Windsor and to enjoy the atmosphere of this special day.”

Harry and Meghan will say ‘I do’ in front of The Dean of Windsor, who will conduct the service, and The Archbishop of Canterbury, who will officiate.

Prince Harry and Ms. Markle are greeted on arrival at Edinburgh Castle by the Band of the Royal Marines and the mascot of The Royal Regiment of Scotland, Shetland pony Cruachan🐴 pic.twitter.com/3nzR9W6ZP5

— The Duke and Duchess of Cambridge (@KensingtonRoyal) February 13, 2018

After exchanging vows and doing the carriage ride, the couple will return to Windsor Castle for a reception at St. George’s Hall.

Of course, we’re still waiting for the answers to the BIG questions: what dress will Meghan wear and who will be bridesmaids!

Harry proposed to American actress Meghan during a cosy night in at his home in Kensington Palace in November, after seeking permission from her parents.

They began dating last July after being introduced by a mutual friend in London, whom they’ve vowed not to name in order to protect her privacy.

They hit it off immediately and just weeks later jetted to Botswana together.

Harry said in an interview with BBC News after the engagement: “We camped out with each other under the stars — she came and joined me for five days out there, which was absolutely fantastic.

“So then we were really by ourselves, which was crucial to me to make sure that we had a chance to get to know each other.”

Contrary to reports, Harry had never watched Meghan’s legal drama series Suits before and had no idea who she was before the blind date.

“I was beautifully surprised when I walked into that room and saw her and there she was sitting there,” he said.

“I thought, I am really going to have to up my game here, sit down and make sure I’ve got a good chat.”

Harry added: “The fact that I fell in love with Meghan so incredibly quickly was sort of confirmation to me that all the stars were aligned, everything was just perfect.

“It was this beautiful woman just sort of literally tripped and fell into my life, I fell into her life.

Read more: Call The Midwife’s Helen George hits back after being called “massive”

“I know the fact that she will be unbelievably good at the job part of it as well is obviously a huge relief to me because she will be able to deal with everything else that comes with it.

“We’re a fantastic team. We know we are. And we hope to, over time, try and have as much impact for the things that we care about as much as possible.”

Meghan has now quit her role on Suits – and acting in full – to move to London.

She and Harry will live at Nottingham Cottage, his residence at Kensington Palace, next door to Prince William and Kate Middleton.