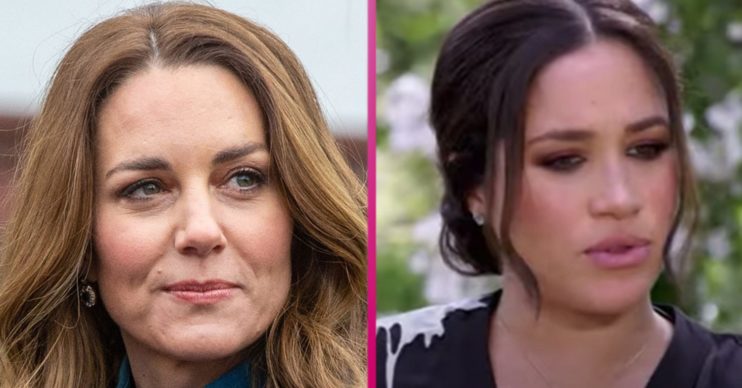 Meghan says Kate made HER cry...

Kate Middleton is reportedly “mortified” by the claim she made Meghan Markle cry.

She also points out that the Duchess of Cambridge always strives to treat others with respect.

Speaking to OK! Magazine, Katie said: “Kate has never wanted any suggestion of a rift with Meghan to come out in the press, so for this story to be circulating is very hard.”

According to Katie, Kate believed she had rectified the apparent disagreement over bridesmaids dresses.

Is Kate Middleton upset over the Meghan Markle claims?

And that the matter was now water under the bridge.

Katie continued: “Kate felt it was all sorted, so to have it brought up again was mortifying. Kate is not in a position to respond and Meghan and Harry know that.”

In addition, the Duchess of Cambridge is reportedly very sad behind closed doors over the accusations.

Kate has stepped out in public since Oprah Winfrey’s interview with Harry and Meghan initially aired last week.

This included attending a school visit with Prince William and leaving daffodils at the memorial for Sarah Everard.

In the lead up to Harry and Meghan’s 2018 wedding, it was widely reported that Kate had cried over a dispute with Meghan.

It was said to be all over bridesmaids dresses – and whether the bridesmaids should wear tights or not.

However, during the Oprah interview, Meghan claimed it was the other way around.

She insinuated that it was actually Kate who had made her cry.

What did Meghan Markle say about the alleged incident?

She added: “And I don’t say that to be disparaging to anyone, because it was a really hard week of the wedding, and she was upset about something.

A follow up report in The Times claims that Meghan slammed the door in Kate’s face when she turned up with the flowers and note.

Meanwhile, Finding Freedom author Omid Scobie has revealed an alleged email in which Meghan asked the Palace to correct the ‘false’ story.

He claims her requests were ignored.

ED! has contacted reps for Kate Middleton for comment on this story.