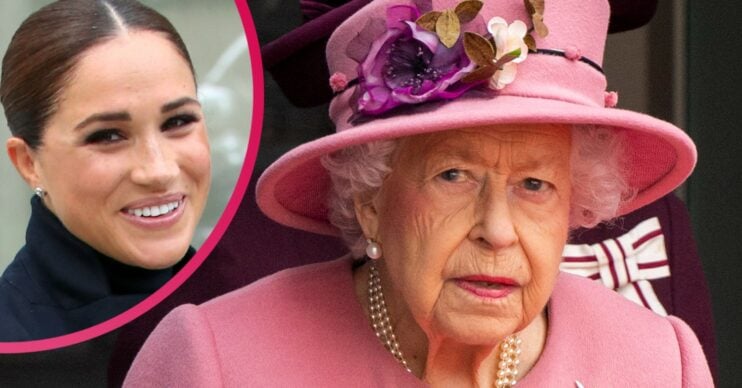 Harry and Meghan set to return to UK as their ‘diaries remain free’ for Queen’s Platinum Jubilee?

Her Majesty's big day could reunite the royal family

Meghan Markle and Prince Harry could be planning on visiting the UK this year.

The Duke and Duchess of Sussex moved to Los Angeles in the United States of America in 2020.

At the time, they announced that they were stepping down from the roles as senior working members of the Royal Family.

Since leaving the UK, Harry has returned twice. Once for Prince Philip‘s funeral and another time for Princess Diana‘s statue.

Meanwhile, Meghan has yet to step back onto UK soil since the couple relocated.

If they do return later this year, it will mark their first time returning as a couple.

According to a royal expert, the pair are “keeping their diaries free” in anticipation of returning to mark the Queen’s Platinum Jubilee.

Neil Sean has warned how Meghan and Harry’s appearance could “take focus away from the Queen” as she marks 70 years on the throne.

Royal commentator Neil Sean said on his YouTube channel: “I’m sure that her gracious Majesty the Queen would have enough people helping to serve the teas and possibly clearing up at Windsor Great park, who knows.

“You can only imagine what on earth they [Harry and Meghan] could possibly offer.

“I don’t mean that in a cruel way but you know it’s going to be very difficult for Her Majesty the Queen and of course, His Royal Highness Prince Charles and Princess Anne.”

He continued: “What could they offer? That would take a lot of focus away from the Queen.

“What I’m suspecting is there will be some kind of banquet, perhaps low-key, that they possibly could get invited to. What we do know, however, is their diaries are remaining free.”

Meanwhile, the UK will have a four-day public holiday to celebrate the Queen’s Platinum Jubilee this year.

What do you think about the latest Meghan and Harry news? Leave us a comment on our Facebook page @EntertainmentDailyFix and let us know what you think of this story.