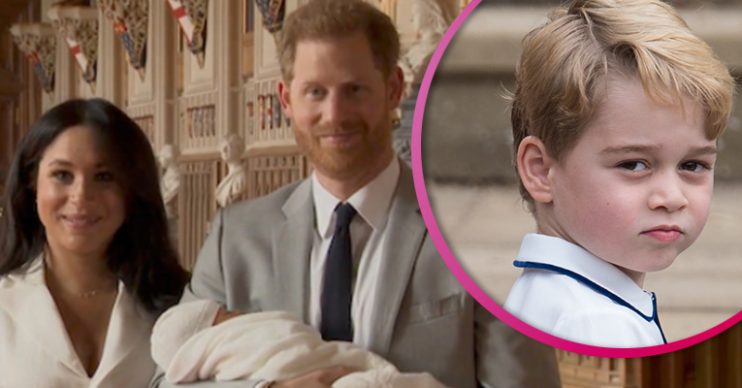 Did Prince George hold the secret to his cousin Archie’s name?

After much speculation, the Duke and Duchess of Sussex announced yesterday that they have called their newborn son Archie Harrison Mountbatten-Windsor.

The moniker surprised many royal fans and some are trying to figure out if the name is a tribute to any members of the royal family.

However, back in January, Archie’s cousin Prince George, five, reportedly told a dog walker that his name was Archie while out with his grandmother, Carole Middleton.

The stranger told The Sun at the time that she pretended she didn’t recognise the prince and asked what his name was.

She told the publication: “Just to be friendly I engaged in a bit of small talk and I asked George what his name was, even though obviously I knew it.

“To my astonishment he said, ‘I’m called Archie’ with a big smile on his face. I don’t know why he calls himself Archie but kids often play with their names and I think it’s lovely.”

Some royal fans have even wondered whether George heard Meghan and Harry discussing baby names and blurted it out when talking to the dog walker.

Archie was born in the early hours of Monday morning and is seventh in line to the throne.

The royal tot attended his first photocall on Wednesday as proud parents Meghan and Harry showed him off to the world in front of cameras inside St George’s Hall at Windsor Castle.

Hours later, the couple announced their baby boy’s name alongside a photo of the royal tot meeting his great grandmother the Queen and Prince Philip.

Meghan’s mum Doria Ragland, who was by her daughter’s side at the birth, was also in the photo.

What do you think about Archie’s name? Let us know what you think by leaving a comment on our Facebook page @EntertainmentDailyFix!