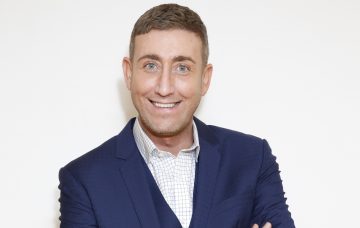 A quick trip to the loo turned into a terrifying ordeal

X Factor star Chris Maloney has revealed he suffered a traumatic experience after being trapped in a hotel bathroom for an entire night.

The singer has said an ordinary nighttime bathroom visit turned sour when the door handle fell off, trapping him in the room.

He said he found himself stuck, with no hope of escape, batting his claustrophobia as he waited until morning.

Chris spoke to The Liverpool Echo about his ordeal.

“I started having a panic attack,” he said, “it was getting hot, the heater was on and there were no windows. I knew I needed to calm down because I just kept thinking there’s no air in here, it’s starting to go!

“I was banging and screaming for over an hour, but no one heard my cries for help, my hands were red and bruises started to show up I was banging that hard.”

Chris said he was pleased the incident hadn’t happened to someone a lot more vulnerable than him, but claimed his claustrophobia still made it very difficult to deal with.

“I was just glad it was me and not some little old woman who’s got a heart condition or something. I can see the funny side of it now and laugh but at the time it was so scary.”

Eventually, Chris said he realised there was no way of getting help, as he’d left his phone in the other room, and so he made himself a bed out of towels.

Once morning arrived, he resumed yelling, and a neighbouring room alerted staff.

He seems to have recovered well from his ordeal, tweeting “Guys, bit of advice when you check-in to a hotel make sure you check the bathroom door handles work! xx 😂.”

Another tweet read: “Next time you check-in a hotel CHECK ALL THE DOORS! Lol xx.”

Many fans responded to say the incident sounded horrific.

One wrote: “How horrible Christopher. My mum is claustrophobic. It is so horrible. I am so glad you got out. All the best with the tour .”

Another said: “Oh Chris!!! Bless you, are you OK now?!? Definitely take your phone from now on!!!”

And a third added: “OMG Chris, that must have been very scary. I would have freaked out big time.”

The star is currently on tour with his Celebrity Big Brother co-star Kristina Rihanoff in a dance retrospective, Dance to the Music.

Have you ever been trapped in a room? Leave us a comment on our Facebook page @EntertainmentDailyFix and let us know.