Telly fans were in tears after learning about Jade Goody's 'tragic' childhood in a new documentary series on Channel 4.

In part one of the programme, viewers saw her journey to series three of Big Brother and beyond, including the video application that nabbed her a place on the hit reality show and her business sense after leaving and becoming a household name. 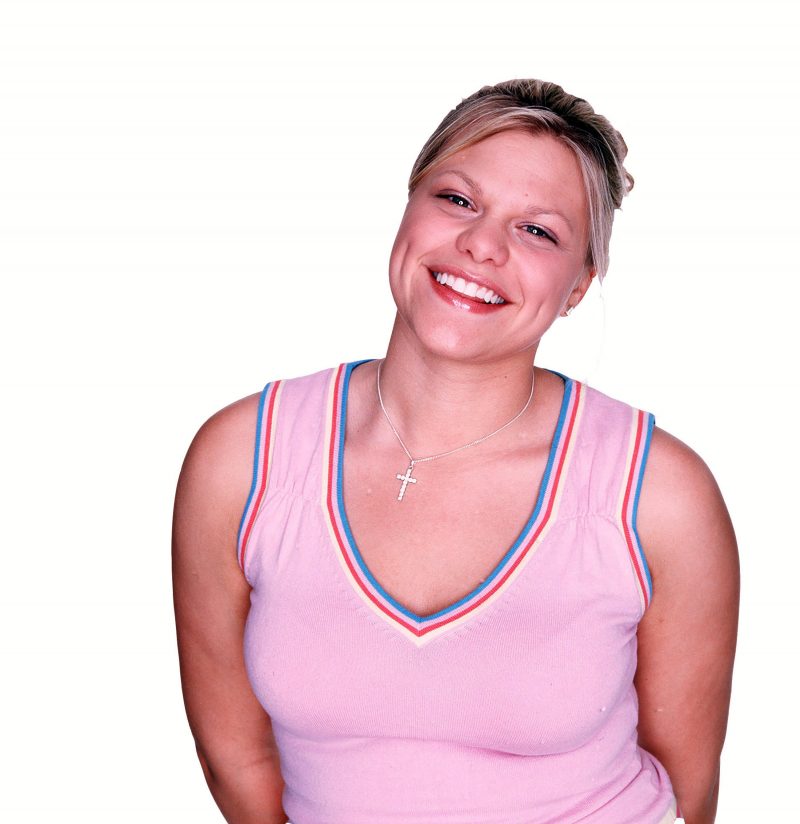 Jade shot to fame in 2002 as a contestant on series three of (Big Brother Credit: Channel 4)

Read more: Jeff Brazier pays tribute to Jade Goody on what would have been her 38th birthday

Jade's mum, Jackiey, was interviewed for the documentary and revealed her drug addiction and how it affected her daughter.

She insisted that Jade, who was just 20 years old when she entered the Big Brother house, went on the show "to get away from her" rather than get famous. 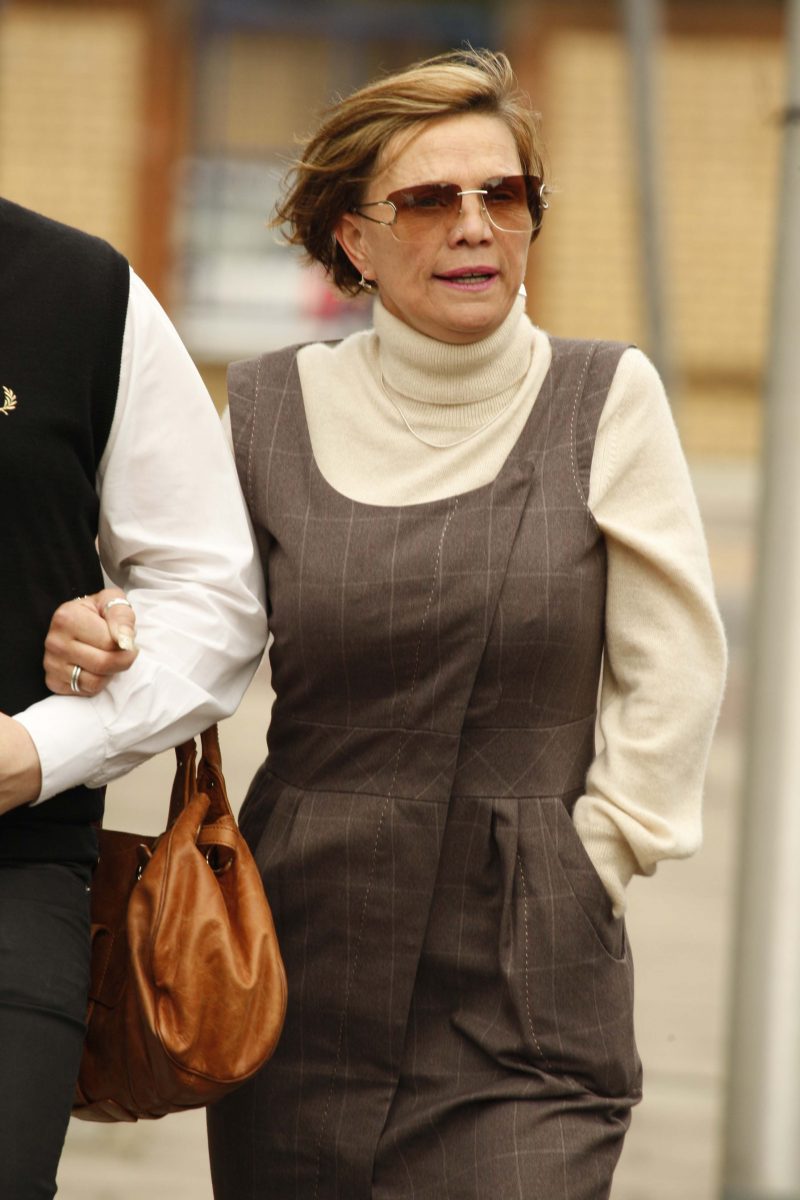 And in an unearthed interview, Jade opened up about her dad injecting himself with drugs in front of her when she was a child.

The reality star's ex and father of her two kids, Jeff Brazier, was also on the documentary to talk about the first time he met her.

He said: "I was absolutely fascinated by what had created Jade. All I could see in her was that there was quality in her and that she couldn't see it. She had a lot of layers to her. That part of her that pretended not to be intelligent was a survival mechanism." 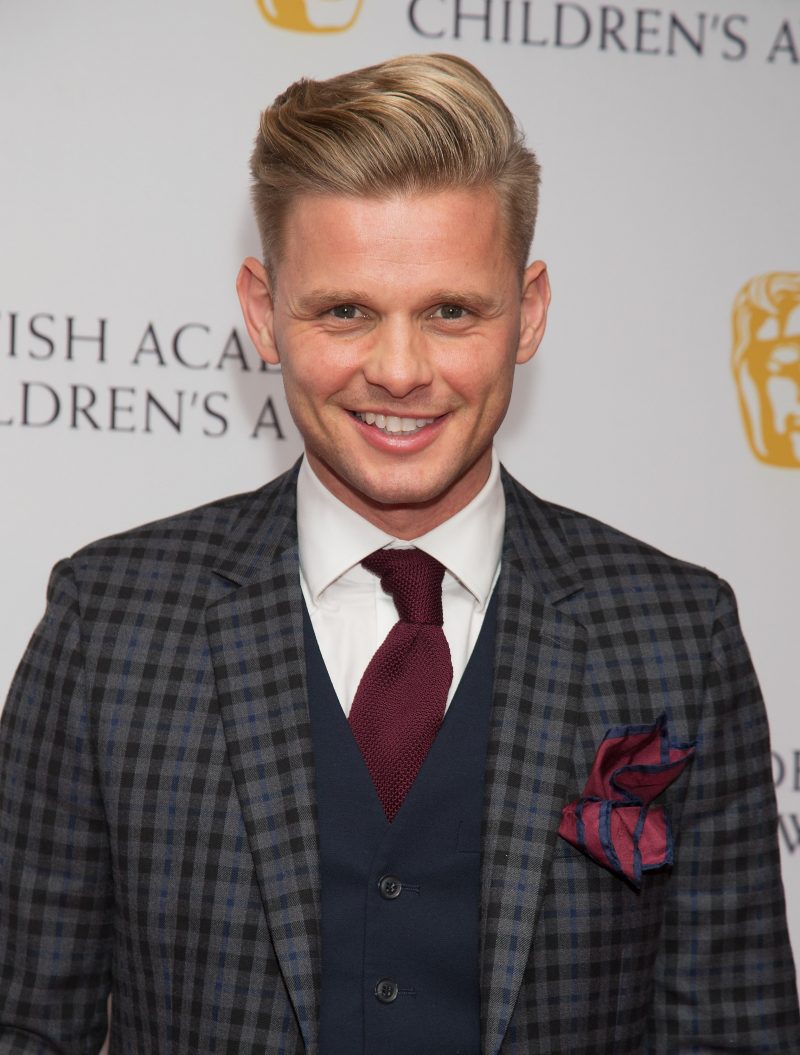 On Twitter, tearful viewers reacted to the scenes after the documentary aired.

One said: "Just caught up. Quite emotional watching this. Big Brother glory days. Jade gave the public what they wanted. She was also able to play the press at their own game. Good on her. RIP."

Another tweeted: "Crying my eyes out @Channel4 #JadeGoody program!! This girl had a tough life and still carried on... #inspirational Go for #smeartest ladies!!"

Poor Jade Goody had no childhood at all.

A third commented: "Just watched the 1/3 Jade: The reality star #JadeGoody. Very emotional highs & lows. Like her or not, she was a woman, a daughter, a mum & a wife. She made a difference on her short spotlit platform. If only others used their platforms in a more positive manner!"

Someone else said: "Poor #JadeGoody had no childhood at all, poor bairn, she really was an incredibly inspirational lady, ensuring her boys were loved beyond words. @JeffBrazier you too spoke kindly and let the world know about the hacking, your boys will be proud."

"Catching up with this #JadeGoody documentary," tweeted a fifth, adding: "I don't remember people being so mean to her. I bloody loved her in the BB house. She was just one of us, having a good time!!" 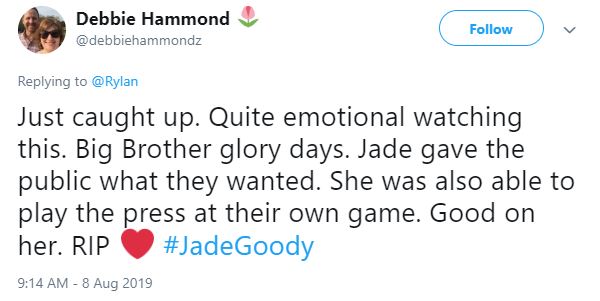 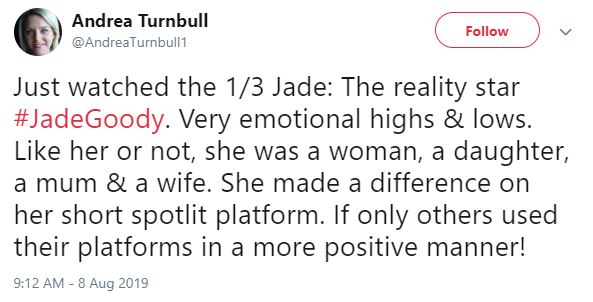 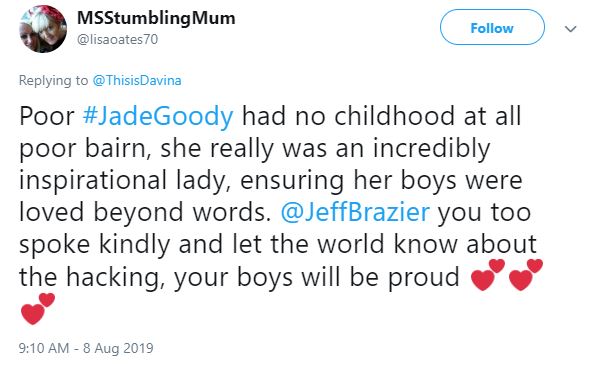 At one point while battling the disease, she looked at it as punishment for her part in the infamous race row on Celebrity Big Brother, during which she sparked an avalanche of viewer complaints over 'racist' comments she made to fellow housemate Shilpa Shetty.

And her struggle with the illness got so bad, she wanted to end it by taking her own life.