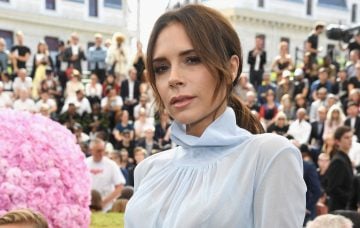 The fashion designer is going to be a vlogger!

She’s been a Spice Girl, a solo singer, a fashion designer – and now she’s going to be YouTuber!

Victoria Beckham has stunned fans with the announcement that she’s set to launch her very own YouTube beauty series.

Speaking in a clip on her InstaStories, the 44-year-old revealed: “I am starting my own YouTube channel, that will be full of styling tutorials, lots of stuff from me!”

The mum-of-four unveiled the exciting news in a sit-down chat with fashion journalist Derek Blasberg, filmed during London Fashion Week in September.

At September’s LFW @derekblasberg joined me at my store to celebrate #VBSince08! Today I have special news to share. I will be launching my own @youtube channel with beauty tutorials, styling tips and lots of stuff from me. Stay tuned! x Subscribe to my channel at the link in bio today x Kisses VB

Sharing the news in another video on Instagram, Victoria, who opened her shop on Dover Street 10 years ago, also joked that her American friend, Derek would be appearing naked. She added: “Apparently people want it, it’s what they really, really want.”

She added: “This is a new chapter, I can put my foot on the gas and do everything I’ve wanted to do for a very very long time.”

Derek laughed: “Foot on the gas? Are you a very good driver?”

A smiling VB replied: “Have you not seen Spice World? Did you see how bad I was?”

She captioned the video: “At September’s LFW @derekblasberg joined me at my store to celebrate #VBSince08!

“Today I have special news to share. I will be launching my own @youtube channel with beauty tutorials, styling tips and lots of stuff from me. Stay tuned! x Subscribe to my channel at the link in bio today x Kisses VB.”

Victoria – who is married to former footballer David Beckham – has 23.5million followers and every one of them seemed delighted with the news, commenting: “I love your sense of humour!!! People say that you’re serious but we Spice girls fans know how hilarious you are!!!!”

Another wrote: “She’s so charming and beautiful.”

It’s something of a consolation prize for fans who were hoping against all odds that the fashion designer might join her old bandmates on the Spice Girls tour.

Instead, she sent her well-wishes to Melanie Brown, Melanie Chisholm, Geri Horner and Emma Bunton.

Victoria said: “Being in the Spice Girls was a hugely important part of my life and I wish my girls so much love and fun as they go back on tour, I know they will put on an amazing show and the fantastic fans past and present are going to have a wonderful time!”

We can’t wait to see what she comes up with in her YouTube series. Here’s hoping David gets the odd cameo…

Will you be subscribing? Leave us a comment on our Facebook page @EntertainmentDailyFix and let us know what you think.