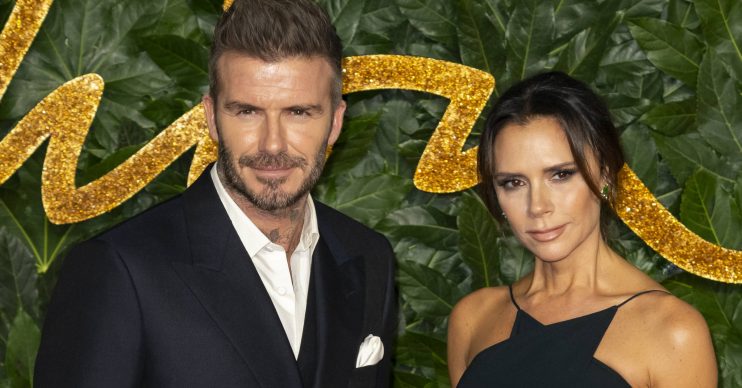 The festival was a family affair for the Beckhams

Victoria Beckham swapped the catwalk for the farm as she attended Glastonbury with husband David.

The fashion designer shared a picture of the couple at the festival on her Instagram story.

The couple had previously enjoyed music from The Charlatans from the side of The Other Stage, with Beckham sharing a video from his vantage point.

The couple’s oldest son Brooklyn has also been enjoying the festivities at the festival, accompanied by his girlfriend Hana Cross.

The model has been sharing videos of the couple partying at the festival, with Brooklyn dressed in a tie-dye bucket hat.

However, Cross said they had been suffering in the sunshine, as the festival basked in temperatures of up to 28C.

She shared a photo of the pair frowning into the camera, writing: “We hot,” with a sweating emoji.

Meanwhile, Victoria and David – who will celebrate their 20th wedding anniversary next week – were caught on camera sharing a smooch at the festival as they listened to Nick Grimshaw’s DJ set in the Park bar.

An onlooker told The Sun: “They were snogging and groping each other like a couple of teenagers. It was a very public show of affection, but they didn’t seem to care.

“At one point Victoria was seen grabbing David’s bum. They’re not usually prone to public displays of affection but were clearly letting their hair down for once.

“Nick’s set ran from midnight to 2am, and Victoria danced for the entire two hours, sometimes with just David, sometimes with friends. David was being quite protective of her and shepherded away a fan who wanted to chat at one point.”

The person said Victoria was “clearly having a great time, smiling and laughing”.

Did you go to Glastonbury? Let us know what you think on our Facebook page @EntertainmentDailyFix.