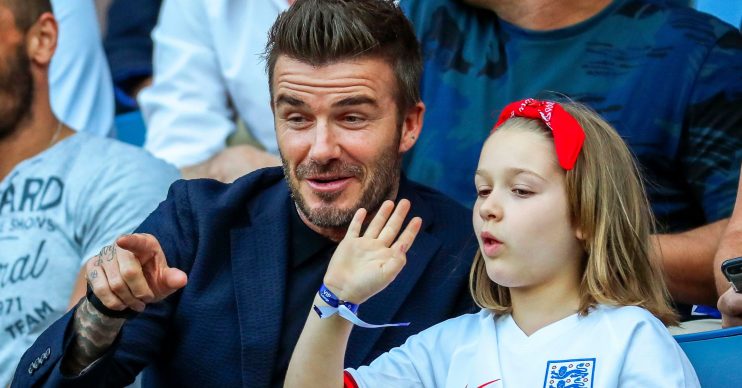 David Beckham was recently slammed by Piers Morgan for kissing his seven-year-old daughter, Harper, on the lips.

But the footie legend was unrepentant and kissed her again last night (Thursday June 27) as they celebrated England’s victory in the quarterfinals of the Women’s World Cup.

David, 44, and Harper travelled to Le Havre, France to watch England as they took on Norway for a place in the semi-finals.

The two were seen high-fiving and having a great time as the goals went in, and David was pictured kissing his daughter in celebration.

David revealed on The Graham Norton Show last month that Harper has a passion for football, just like her dad.

“Harper is playing every Sunday and loves it. The boys don’t play and it’s heartbreaking,” he told Graham.

“They have a talent but it’s down to Harper now. I get very enthusiastic when watching her.”

Before the game former teammate and Engand manager, Phil Neville, revealed that David had given his team a rousing pre-match talk.

And David shared a photo on Instagram that showed him and Harper with the team.

He wrote: “So lucky to get to see the girls before tonight’s big game… As a player I know exactly what it means to play in these competitions and to have the support from home which means so much.

“I just want to say how very proud we all are of every single player, they are doing amazingly well and the whole country is behind them!!!

“As you can see Harper was so excited to meet the team & is so excited for the game…. Come On England @lionesses@philipneville18.”

England star Nikita Paris replied to the post, saying: “What a man, thank you so much for your support. Was a pleasure meeting Harper today, future lioness #Legend.”

Good Morning Britain host Piers Morgan branded Becks “creepy” and “weird” for kissing his daughter Harper on the lips after he defiantly shared a video of himself giving Harper, seven, a peck after trolls previously slammed it as “wrong”.

“I got actually criticised for kissing my daughter on the lips the other day,” David said back in 2017.

“I kiss all my kids on the lips. Brooklyn, maybe not. Brooklyn’s 18, he might find that a little bit strange. But I’m very affectionate with the kids.”