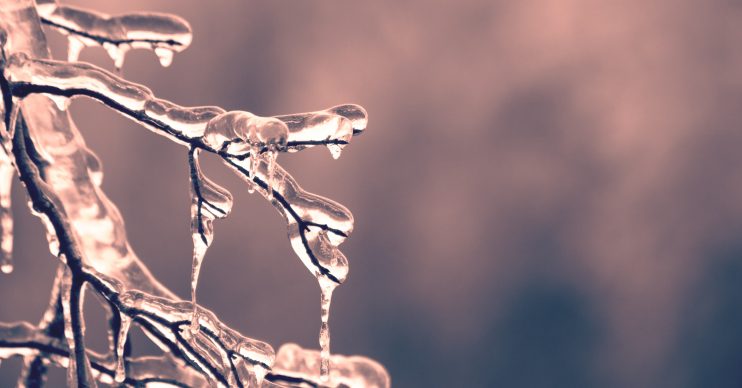 The UK has been tipped to endure its coldest weather in 30 years – and winter certainly seems to be drawing in.

Weather experts have predicted temperatures way below freezing are on the way in the next few weeks and “very volatile” weather could be imminent.

According to the Express website, weather forecast map by WX Charts suggest it could drop as low as -10C across large areas of the UK in the next two weeks.

Those bitterly cold conditions are expected from the middle of December, with the north of England experiencing a -7C chill on December 15.

#Frost and #fog are the main concerns with the #weather to start this week, but with some heavy #rain later. Here’s the details 👇 pic.twitter.com/T7doMhofyu

Parts of South Wales could suffer temperatures of -6C at the same time and central Scotland could be frozen by a -10C low.

The Midlands and south east of England may be slightly milder, but still see a drop to as low as -2C.

Surface temperatures are expected to fall away below freezing.

A Met Office spokesperson warned The Sun: “Surface temperatures are expected to fall away below freezing and following the rain and recent wet weather many surfaces are likely to remain wet leading to icy stretches forming where these not treated.”

And Weathertrending added: “Expect threats from both frost and even some snow to be gradually increasing from the north – last to reach southern counties.

Will the #cold conditions stick around through the week? ❄️

Find out with Aidan as he takes you through what to expect from the weather this week, brought to you by @halls_uki pic.twitter.com/M5djY5YOql

“The first week of December could provide some very volatile weather indeed.”

Snow is also expected, especially across the northern areas of England and Wales, and Scotland – with some bookies no longer taking bets on it being a white Christmas.

Up to two inches could fall during this period making interruptions to travel plans likely.

The Netweather agency told the Express website: “There is potential for a more significant, albeit brief, spell of colder weather around mid-December, possibly with snow for some, mainly in northern and eastern parts of the country.”

Do you think it’s been a wet autumn? That probably depends on where you are. . Autumn rainfall records were broken for South Yorkshire, Nottinghamshire, and Lincolnshire, with the previous records set in 2000. England as a whole has had its fifth wettest Autumn with 348mm. . South Yorkshire was the wettest county compared to the long-term average (1981-2010) with more than double its average rainfall for the month (425.4 mm compared to an average of 208 mm) . Sheffield has been a notably wet location, smashing its Autumn record weeks before the end of the season. . The location with the highest total through the Autumn was Holne on the southern edge of Dartmoor in Devon with 899mm. The driest spot was Shoeburyness in Essex with 148mm. . Conversely, northern and western Scotland have been much drier than average, with our north Scotland climate region having just 69% of the seasonal average (364.1mm). . These significant contrasts across the UK have meant that Autumn 2000 – with its wet weather more widely spread across the country – is still the UK’s wettest autumn on record. . This week we can expect a reversal of fortunes, with the wettest weather affect northern and western Scotland and largely dry conditions elsewhere.