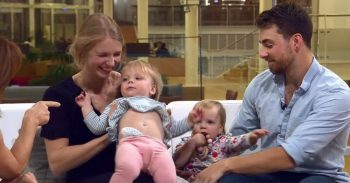 Isla and Jemima may look cute, but they wreaked havoc!

It’s unusual to see super-professional news anchor Kay Burley lose her cool, but she met her match when twins Isla and Jemima appeared on her couch yesterday.

On Tuesday (5 March), even Kay had to admit defeat and let the cute siblings run amok in the studio.

Read more: The Chase blasted for question about The Prodigy hours after news broke of Keith Flint’s suicide

And luckily Kay saw the funny side, when the toddlers caused chaos and ran around the set – even forcing the presenter to pick one up at one point and carry her back!

Well, have you ever tried to keep 18-month-old twins contained where there are lots of cables, glass, shiny things and steps?

“Miracle twins” Jemima and Isla appeared on Sky News with their parents, who were there to talk about the life-changing surgery mum Tabitha went through when she was pregnant due to an abnormality in her placenta.

Isla and Jemima were born seven weeks premature as a result of Twin-to-Twin Transfusion Syndrome (TTS).

As their parents spoke to Kay about their challenging pregnancy, the not-at-all-terrible twins ignored the soft toys that had been laid out for them, instead preferring to explore the set.

Isla was seen grabbing Kay’s interview notes and throwing her toy monkey off a ledge, before heading straight for one of the expensive cameras.

She also knocked over the coffee table and made a run for it, before her dad Ben grabbed her and tried to sit her back on his lap. Which lasted all of about one second!

Kay handled it all like a pro, joking the pair were going to be “a handful”.

Morning everyone,
If you haven’t watched this, you really should. I promise it will brighten your day ☺️ https://t.co/uwlKugosW8

Fans watching from home fell in love with the little ones, with one saying: “What an absolute delight to watch these little girls; @KayBurley handled with aplomb!!”

Another said: “The twins in the Kay Burley Show are hilarious.”

A third added: “Loved watching the cute twins cause chaos with ⁦@KayBurley⁩ on ⁦@SkyNews⁩ earlier – if you didn’t see it have a look…”

Hard to imagine now, but Isla and Jemima weighed less than 3lbs each when they were first born.

Loved watching the cute twins cause chaos with ⁦@KayBurley⁩ on ⁦@SkyNews⁩ earlier – if you didn't see it have a look…https://t.co/py7s8FyEMp

The twins in the Kay Burley Show are hilarious 😂 #skynews

What an absolute delight to watch these little girls; @KayBurley handled with aplomb!!

Mum Tabitha had to be operated on just 18 weeks into her pregnancy, as the twins were getting an uneven amount of blood as a result of this extremely rare abnormality of the placenta.

After having laser ablation surgery and an amnio-reduction in her second trimester, Tabitha had an emergency C-section at 28 weeks.

“They’ve been amazing,” beamed Tabitha. “They’re absolutely amazing little girls and they’ve overcome all the odds and you wouldn’t know anything even happened.”

What is your preferred channel to watch news? Leave us a comment on our Facebook page @EntertainmentDailyFix and let us know what you think!