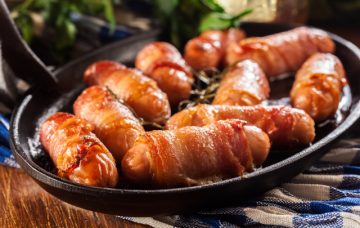 There could be a pigs in blankets shortage this Christmas

There might not be enough workers to make them

There could be a pigs in blankets shortage this Christmas, the meat industry has warned.

Due to labour shortages, there aren’t enough workers to carry out some of the tasks for the festive period including making the UK’s favourite Christmas dinner addition.

The British Meat Processors Association has said this could mean pigs in blankets and other popular festive foods may start vanishing from supermarkets.

The BMPA is concerned that there won’t be sufficient labour to carry out the task of making pigs in blankets, which have to be rolled by hand.

Chief executive, Nick Allen said: “When it comes to Christmas, we often want our meat to be a bit special.

“The classic example is pigs in blankets. These are incredibly fiddly and very labour intensive.

“Packing plants need 10-15 per cent extra labour to get everything ready. And this is a challenge at the moment because of Brexit.”

It’s not certain where storage will appear but the BMPA says it’s likely to be some of the more Christmas products.

Allen added: “The meat industry is trying to juggle, but something has got to give somewhere. There’s only so much overtime you can ask workers to do.

These are incredibly fiddly and very labour intensive.

“It’s all the little extras that make it Christmas which create the extra work, and that’s where we’re struggling.”

We recently revealed that Tesco is selling NINE different varieties of pigs in blankets this Christmas.

The range includes pork, chicken, giant, vegan and even sweet pigs in blankets.

You could opt for a spicy Spanish version with ten chorizo-style British pork sausages with smoked red peppers, paprika and garlic wrapped in oak-smoked streaky bacon.

Or for a lighter chicken alternative, opt for the ten Chicks In Blankets – chicken sausages hand-wrapped in smoked streaky bacon.