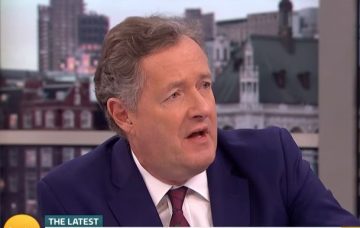 We're excited about this news

Good Morning Britain has confirmed that TV veteran Richard Madeley will replace Piers Morgan as a presenter from Monday.

Richard, 61, is covering Piers, 52, for an unspecified period of time, after the GMB presenter announced he was taking another break.

On Wednesday morning’s show, Piers told viewers he would be “off for a while.”

He seemed delighted to be off, as the series relocates to a new building.

It’s currently recorded at The London Studios and is in the process of renovations, so filming will move to a new location when Piers returns.

He complained on Wednesday: “We got into the world’s worst lift, someone said to me ‘Are you sad to be leaving the ITV Studios?’

“And I said, ‘I’m about as sad as I am when I’m leaving the dental chair after having a root canal.'”

As the show ended, he declared: “I won’t be back for a long time, so you can all relax now.”

Richard, who is married to fellow presenter Judy Finnigan, last hosted the morning show back in October with Susanna Reid, when Piers took a break to film Life Stories and his Serial Killers series in the USA.

There is no official word how long Piers will be gone, but some reports say he’ll return after the Easter weekend.

The former newspaper editor – who joined the ITV breakfast show in 2015 as a co-host alongside Susanna – announced the news on Twitter.

He wrote alongside a picture of Susanna with her head on the studio desk: “BREAKING: Bad news for Britain, even worse news for @susannareid100…. I just signed a new deal to stay on @GMB for 2 more years. #TheFoghornStays.”

The news was met with a mixed reaction from viewers, with some celebrating and others commiserating.

One fan wrote that they were delighted, telling Piers he is “the best TV presenter this country ever had, you should run for prime minister.”

Other viewers were upset, with one writing: “There’s always Thursdays and Fridays to look forward to,” referring to the days when Ben Shephard takes on the role.

Whatever else this news means, we’re likely to get less shouting next week.

Do you think Richard will make a good replacement for Piers? Leave us a comment on our Facebook page @EntertainmentDailyFix and let us know what you think!