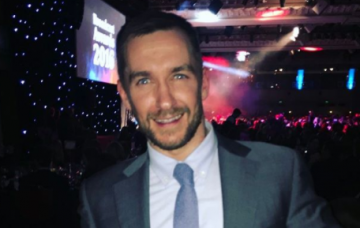 But they're so cute together?!

The Sun Online reports that Australian Dianne, 28, was unhappy having a long distance relationship and they ended things just before Valentine’s Day.

The source says: “They were loved up for weeks but things fizzed out once they both went back to work after Christmas.

“Anthony returned to filming and is based in Manchester while Dianne also has a busy schedule and lives in London. They started seeing a lot less of each other.

“They’re still close friends and didn’t end on bad terms but they struggled to see their relationship working, especially when Dianne goes back home to Australia.”

The TV stars reportedly started dating in December, after being set up by mutual friend and chief matchmaker, Gemma Atkinson.

At the time, The Sun reported that Anthony was “smitten”.

Their sources claimed: “Anthony and Dianne looked very cosy on Saturday night in the studio. He has told pals he is really into her and made the trip down to London to see her.

“During rehearsals, she darted off the dancefloor and ran straight up to him in the crowd to give him a cuddle.

“They seem like a lovely couple. They were very close at the show’s official after-party. They weren’t bothered who saw.”

But they met before December. They were pictured together – along with Gemma – in October, when soap actor Anthony, 33, went to watch filming of Strictly, where Gemma, 33, was a contestant.

Both Gemma and Anthony have starred on Hollyoaks and Emmerdale. The actor played Gilly Roach on the Channel 4 soap, before joining Emmerdale as Pete Barton.

Her dance partner was Reverend Richard Coles and they were sent home in the third week.

She previously appeared on Dancing With The Stars in Australia before coming to the UK for Strictly.

Anthony and Dianne were last pictured together at the beginning of February, when the dancer posted a photo of them together, writing: “Yeh he will do !!!!! #heisabitcute”.

They were also seen on a date night on 14 January, when Anthony, 33, posted a photo after dinner in London with Oti, and several others.

And only a couple of weeks before, he wrote a tribute to his girlfriend on Instagram confirming they’d spent New Year’s Eve together.

He wrote: “Saw in the new year with this beaut @diannebuswell amongst other friends. A big thanks to @ashleytd as he really looked after us and practically sorted our new year out! Happy New Year everyone, bit late to the party I know but I hope it’s full of everything you wish for! #2018 #happynewyear.

Read more: Cheryl is set to make a major TV comeback with a dance show

Are you sad to hear this news? Leave us a comment on our Facebook page @EntertainmentDailyFix and let us know what you think!