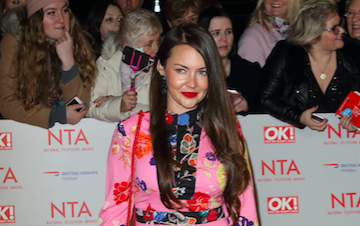 She's still loving playing her though

But while the star isn’t a huge fan of the young mum, she admits that playing her has been great fun.

Stace has gone off the rails since cheating on hubby Martin Fowler at Christmas with her ex lover and father-in-law, Max Branning.

Since then she’s given poor Martin an excruciatingly hard time, throwing him out of his own home and threatening him with a custody battle over their daughter Hope.

Speaking to Radio Times, Lacey says that while she doesn’t agree with her character’s actions, she does have sympathy for her.

She said: “I’m quite upset with her at the moment. But it is what it is. Max is that thing she can’t get rid of – the devil inside her.

“It’s fun to play, but it’s not good for Stacey. He’s her one weakness. It’s like me with chocolate!”

Lacey went on to add that she has really enjoyed the Slater reunion that we’ll see on screens over the next couple of weeks and working with her old mates Laila Morse (Big Mo), Gillian Wright (Jean) and Jessie Wallace (Kat) again.

She said: “It feels like they’ve never been away.

“You can be separated for a couple of years and yet it feels like you only saw them yesterday.”

Are you looking forward to seeing the Slater women back in full force? Let us know by commenting on our Facebook page @EntertainmentDailyFix!

EastEnders continues tomorrow at 7.30pm on BBC One