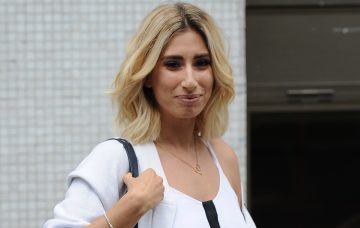 Stacey Solomon flew out to Los Angeles last week for her sister’s hen do, and she revealed over the weekend they had a fabulous time at Coachella.

The Loose Women star has shared numerous snaps from her holiday with her Instagram followers, showing she’s been having fun at the California music festival.

She was pictured dancing in shorts and a bikini top with a sparkly open shirt and followers in her hair.

Stacey’s next post was inspired by Beyoncé after the superstar singer took to the stage to entertain the crowd.

As her friends laughed and encouraged her, Stacey danced around in front of their tent using a cool box to beat as a drum.

“When you want to put on a show for your loved ones after seeing Queen B kill coachella last night. #inspired,” the mother-of-two wrote beside the funny clip.

She then clarified that no alcohol had been consumed prior to her antics!

“No alcohol, I don’t drink, just all me, myself and I giving it my all,” she said,

She then added: “And I’m not sorry. Happy Sunday everyone hopefully this will give u some early Monday motivation #coachella #iLoveBeingSilly #Coachella2018 #queen.”

Her fans found the video hilarious, with more than 300 commenting to tell the 28-year-old she’d brightened up their day.

“Omg I Love this!” wrote one. “This is everything,” said another.

“You are the funniest… your insta stories keep me going. So thank you for putting a smile on my face especially when times are so tough!” confided a third.

Read more: Shayne Ward had to be carried out of his own farewell party

Over on her Instagram Stories, the star didn’t disappoint, revealing her excitement over finding a giant cocktail umbrella at the festival.

Larking around with it in front of the camera, she said it was great as a parasol, a dance prop, and could even be tucked behind the ear like the mini version.

Her broadcast was interrupted at one point though by a giant bee which flew around her filming friend, causing her to freak out and run away!

“Sorry, we had a bee issue with the cameraman!” she said when she returned.

Before she left, Stacey, who is dating former EastEnders actor Joe Swash, had time for a picture in front of the famous Coachella Ferris Wheel.

Standing in from of it with her arms stretched wide, Stacey was pictured from behind to show off her embroidered jacket and plaited hair decorated with flowers.

She wrote: “Classic Coachella post! Haha…. it’s that time when only photos from behind are acceptable. Lucky I have the most beautiful jacket on.”

While Stacey had been showing off her fun side on Instagram, she’s also shown recently that she can be a serious interviewer.

She met with foreign secretary Boris Johnson last week to talk about home schooling, the importance of girls’ education and how MPs can make politics more interesting to young people.

She said of the interview, done for Fabulous magazine: “I’m so lucky, I love politics and am so interested in it so I chewed Boris’ ear off for a good hour.”

They also chatted about Boris’ dad Stanley and sister Rachel appearing on I’m A Celebrity and Celebrity Big Brother respectively, and how Boris would love to appear on such a show – if only he was invited!