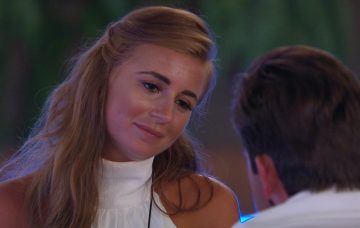 They're getting more serious every day!

Love Island’s Jack Fincham has pledged to spend his life with Dani Dyer in a romantic speech.

The love-struck pen salesman, 26, has already asked actress Dani, 21, who is the daughter of EastEnders’ star Danny Dyer, to be his girlfriend and they’ve exchanged “I love yous”.

And on Monday night’s episode, Jack takes things one step further by assuring Dani he wants to “plan [a] future” with her.

Jack says: “I promise you 100 per cent, I want to plan my future with you. I haven’t felt like this about anyone ever. I forgot what it was like to fall in love with someone and I want to be with you.”

A thrilled Dani replies: “It’s mad isn’t it? I’m glad I’m that girl though. You know when a boy always needs to meet that one girl and you’re never really that girl are you? Now I’m that girl.”

Jack responds: “I love it and I love you.”

Jack reiterates how much he loves Dani by privately telling the Beach Hut he just wants to spend his life with her.

He says: “I want to share my future with her and I want us to build something together. It’s really exciting and Dani she seems happy about it so what a wonderful thing to happen.”

The couple have been paired since day one and are widely seen as the most solid coupling in the villa.

They haven’t been without their drama, however, most notably when Jack’s ex, Ellie Jones, arrived at Casa Amor.

Dani, back at the villa, was concerned Ellie had come to win Jack back and was left in tears when the villa was sent a video clip of Jack’s shocked expression when he saw Ellie.

A tearful and devastated Dani feared her romance was over, unaware that Jack had zero interest in Ellie and had remained loyal to her at Casa Amor.

Thankfully, when Jack and the boys returned to the villa, Jack and Dani straightened things out and are as loved up as ever!

Meanwhile, there will be TWO new arrivals to the villa this evening – two boys! – and two islanders dumped. Drama!

Viewers have been voting for their favourite male and favourite female islander, and the boy and girl with the fewest votes will be sent home immediately.

Who do you want to go home tonight? Leave us a comment on our Facebook page @EntertainmentDailyFix and let us know what you think!