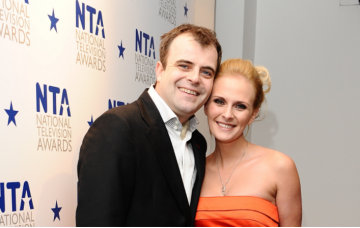 She had two hours to live

Coronation Street’s Simon Gregson and his wife, Emma Gleave have opened up about their traumatic attempts to grow their family – which left Emma hours from death.

The couple are parents to three sons, Alfie, Harry, and Henry Teddy, but their efforts to have children have been tumultuous.

Speaking to OK! magazine they opened up about the miscarriages Emma has suffered, including a life-threatening ectopic pregnancy in September of last year.

Emma had emergency surgery when the ectopic pregnancy was discovered, with doctors claiming that they were just in time to save her life.

Simon had rushed her to hospital when she complained of stomach pains that had escalated to the point that she couldn’t stand up.

Emma had been unaware that she was pregnant at all, so the traumatic experience came out of nowhere.

She revealed that as she was being taken in to surgery she was sure she was facing death, and terrified she wouldn’t see her sons again.

“As they were taking me down to theatre I just kept thinking, I’m going to die – this is it, I’m not going to make it,” she said.

“They told me Emma would’ve died if it had been left for a few more hours,” Simon added. “She was literally two hours away from death.”

The pair are speaking out about the experience to try and help normalise discussions around miscarriages and ectopic pregnancies – caused by the foetus implanting outside the uterus.

“The stigma has been removed from having miscarriages,” Emma said. “But ectopic pregnancy isn’t discussed enough – I didn’t really know anything about it.”

Although Emma would love to have a daughter, the couple have decided they can’t risk another pregnancy, and Simon plans to get a vasectomy.

“I would love her to have [a daughter] – but now, after nearly losing her, I’m going in and having the snip,” he said.