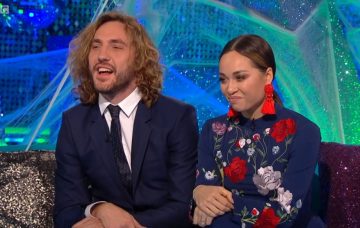 Making something out of nothing?

The comedian and his professional partner Katya Jones were shown the door at the weekend after their Viennese Waltz failed to score high marks, landing them in the dance-off where they were beaten by Graeme Swann and Oti Mabuse.

Their elimination came a few weeks after Seann was pictured kissing Katya, who is married, on a night out.

Seann, who was subsequently dumped by his girlfriend, and Katya both issued apologies, saying it had been nothing more than a “drunken mistake”.

Seann said at the time: “I would like to offer my sincere apologies for my actions. This is no excuse but it was a one-off drunken mistake which I am truly sorry for.”

Which is why some viewers couldn’t help raising their eyebrows when Seann joked on It Takes Two that watching back his and Katya’s final dance on Saturday was “like having to watch a drunk video of yourself from the night before.”

“It’s like having to watch a drunk video of yourself from the night before” #ItTakesTwo pic.twitter.com/vpkqTQSYBk

“It’s like watching a video of you drunk from the night before.” Good choice of words Sean. #Strictly pic.twitter.com/K2SnJ9QA0t

#ItTakesTwo like watching a drunk video of yourself, you say seann.

Seann told Zoe Ball on It Takes Two he was furious with himself for messing up during his last Strictly Come Dancing routine.

“That is the most angry I’ve been afterwards because I knew the dance and I knew I could do it, and when we did the jive I was walking in to the jive going, this is not going to work.

“On Saturday I started going, we’ve got this, and I messed it up and I was really angry at myself.”

Katya agreed: “He was so gutted, so angry, saying he couldn’t believe it and he was so sorry.”

Seann then quipped, referring to the outfit he wore for the Halloween-themed show, “And then I had to get eliminated looking like a man that had fallen from a chimney – it was so embarrassing.”

He said it was “emotional” watching a montage of his Strictly highlights, but said it was a miracle he had got so far in the BBC competition.

“I genuinely, I think I said this, I thought I’d be out week one because at the beginning I couldn’t do anything, so get to week six, I think it’s a miracle.”