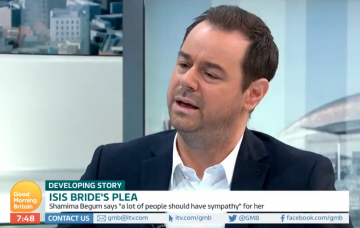 It's certainly a divisive issue

A former Royal Marine has challenged Danny Dyer to a fight over his controversial comments about ISIS bride Shamima Begum.

In a conversation on Good Morning Britain earlier this week, the actor said he thinks the teenager must have been “lost within her soul” when she left the UK to join the terror group.

He told hosts Richard Madeley and Kate Garraway he believes Shamima should be allowed back into the UK – but his views have seriously angered one former Royal Marine.

The veteran posted a video of himself to Facebook slamming Danny and challenging him to an old-fashioned fight, and the clip has since gone viral.

In the footage, obtained by The Sun, he tells the camera: “This is a message for Danny Dyer, or anyone that [bleeping] knows him.

“I’m nearly 58 years old, a scaffolder and used to work for the Royal Marines Commandos.”

He asks Danny to come and meet him so they can have it “straight”, adding: “If you’ve got the [bleep] to give all the [bleep] like that on TV and you don’t know anything about the armed forces with kids losing their dads, mums or anything like that then you need to get a grip.”

The ex-Royal Marine goes on to insult Danny by telling him that, although he likes to act like a “hard man”, he’s about as hard as a “[Bleeping] lollipop”.

During the conversation on GMB, the TV star said he thinks Shamima should be allowed back into the UK, explaining: “I feel she needs a chance, maybe to explain what was going on and maybe we can understand a bit more how they got to her and how she thought it was the right move.”

A representative for Danny has been contacted for comment.

In 2015, Begum left her family home in East London aged 15 to travel to war-torn Syria, where she married her Dutch jihadi partner.

She had two of his children, but they passed away. Only recently, Shamima gave birth to a baby son in the refugee camp where she is currently living.

The issue of whether or not she should be allowed to return home has well and truly divided opinion, and a number of celebrities have stepped up to voice their views on the matter.

Piers Morgan has made it clear he believes the ISIS bride can “rot in hell”, while former Hollyoaks actress Gemma Atkinson told her Instagram followers Begum “should NOT be allowed back in the UK!!!” in a post that included the faces of the 22 people killed in the 2017 Manchester bombing.

But Danny’s sentiment is echoed by Stacey Solomon, who’s admitted the issue has caused “massive conflicts” between her and boyfriend Joe Swash.

Do you agree with Danny on the Shamima Begum issue? Leave us a comment on our Facebook page @EntertainmentDailyFix and let us know what you think of this story.