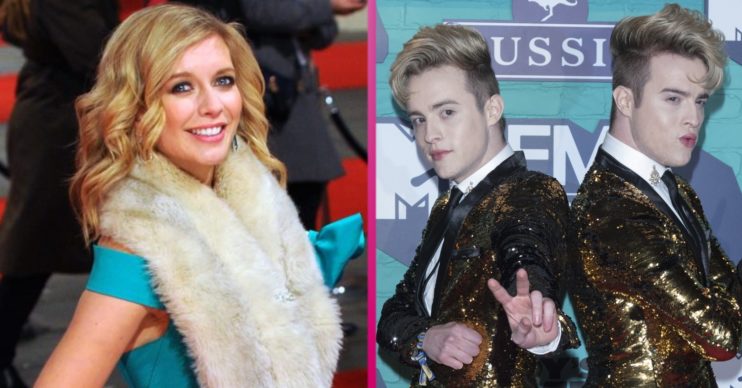 Worse than 'collaborating with Jedward'

Rapper Wiley shocked more than a few with his anti-Semitic Twitter rant – and Rachel Riley was among them.

The Countdown host made her feelings known about his attitude.

She posted her own tweet criticising Wiley for the comments.

What did Rachel Riley say about Wiley?

Rachel took to her own Twitter page to air her views.

“He could have just done a duet with Jedward if he was that keen to end his career,” she wrote.

“An unprompted, still going, public antisemitic breakdown is a bizarre route to go down.”

She later apologised to Jedward for bringing them into the discussion, as she tweeted: “Apologies to @planetjedward, totally flippant joke about them not being particularly grime and no offence intended…

“They’re nice boys and I didn’t think of the cumulative impact of jokes.”

He could have just done a duet with Jedward if he was that keen to end his career.

An unprompted, still going, public antisemitic breakdown is a bizarre route to go down. 🤷🏼‍♀️ https://t.co/LeyFXyZmRm

She referred to the rapper’s social media rant, in which he said the Jewish community is “too touchy”. He also said “Israel is not yours”.

Some of the posts have been removed by Twitter.

Don’t know about you but we’ve been doing loads of quizzes in my house to entertain ourselves during lockdown, and over the past few weeks, I’ve been working with Sky to compile their definitive National General Knowledge Test – the 100 questions you *should* know the answers to! I’ll be testing @russellhoward @tomdaley @kayburley @dynamomagician @23_carra @patrick_aryee LIVE tonight at 7pm on @skytv, so join us if you want to see if they actually do know their stuff! The Sky National General Knowledge Test has been created to launch Sky’s factual channels #SkyNature, #SkyDocumentaries and #SkyHISTORY which are available from today (ideal for brushing up on your quiz trivia.) I’m a massive animal and baby lover, so we’re particularly looking forward to watching Sky Nature’s #WildBabyAnimals, the show follows the first few months of the lives of our favourite cubs and pups, sounds like the perfect viewing to me! #ad

What did Wiley say?

In the posts, which have been widely condemned as anti-Semitic, he also compared the Jewish community to the Ku Klux Klan.

“An unprompted, still going, public antisemitic breakdown is a bizarre route to go down.”

“If you work for a company owned by 2 Jewish men and you challenge the Jewish community in anyway of course you will get fired [sic],” he posted.

“Infact there are 2 sets of people who nobody has really wanted to challenge #Jewish & #KKK but being in business for 20 years you start to undestand why [sic].”

And he was unapologetic.

“Come for me I am ready,” he wrote, after people on Twitter called for him to be arrested or banned from the site.

One year later! Celebrating today with our extra smiler in the family. Love these two 🥰 What a first year it’s been! 🤪🙃👰🏼🤵🏻👶🏻❤️💗 #firstweddinganniversary #twinning

Rachel has been vocal about anti-Semitism in the past.

She spoke out about prejudice against Jewish people which she believed was an issue in the Labour Party.

Meanwhile, as reported by BBC News, Wiley has been dropped by his management company as a result of the tweets.

What do you think of this story? Go to our Facebook page @EntertainmentDailyfix and leave a comment to let us know your views.