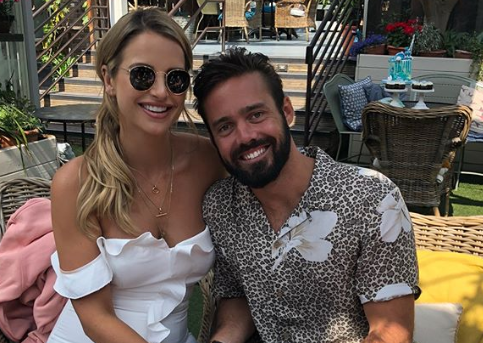 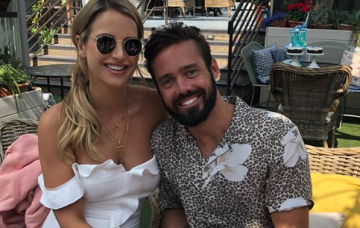 Spencer Matthews and Vogue Williams have tied the knot ahead of their first child arriving in September.

The couple, who became engaged in January, had an “intimate ceremony” with close friends and family at the Matthews’ Glen Affric estate in Scotland at the weekend.

The Made In Chelsea star and Irish model Vogue exclusively shared their wedding and reception with Hello! magazine, which will publish all the pictures and details in an upcoming issue.

The magazine has teased some of the details already, revealing Vogue wore “a dazzling off-white, silk, V-neck wedding dress that was designed especially for her by her friend Paul Costello.”

Vogue , 32, hinted on Instagram on Friday that she had been to see the designer to collect the wedding gown.

“Last minute outfit change thanks to @paulcostelloeofficial I like to go into his studio and hang around until he gives me a dress,” she wrote beside a snap of her with her bump hidden under a floaty graphic print dress.

At the ceremony, Spencer’s brother James, who is expecting his first baby with wife Pippa Middleton, was the best man.

Showing the close ties between the two families, James Middleton, the brother of Pippa and the Duchess of Cambridge, gave one of the readings.

After the “short” ceremony, guests enjoyed a meal made using Scottish produce from the surrounding area, followed by a slice of wedding cake.

Hello! report that the special occasion bake was a “dusky pink, three-tier sponge with fresh raspberries, vanilla cream and buttercream frosting made by a local baker.”

The magazine said the couple also have plans for a “second lavish celebration”, which will presumably involve more of their friends and occur after their baby is born.

Spencer and Vogue were delighted to announce their engagement in January after he went down on one knee when they went to see The Lion King in London.

“SHE SAID YES…” Spencer wrote with a heart emoji alongside a picture of Vogue with a delighted smile, holding her hand to her face to show off her stunning three diamond engagement ring.

“This has been the best year of my life… Love you forever and always,” he later gushed about his fiancée.

The pair then announced in March they were expecting their first baby.

“So… I’m going to be a father! Couldn’t be happier to be sharing these times with the love of my life @voguewilliams . We feel truly blessed,” Spencer said when he shared the happy news with his Instagram followers.

When she told her Instagram followers, Vogue wrote: “I couldn’t be more delighted to announce that we are expecting our first baby! Being with you @spencermatthews is the best thing that has ever happened to me, you are the dream.”

The couple got together after they both appeared on the 2017 series of Channel 4’s The Jump, and romance blossomed on the slopes.

The parents-to-be are thought to be expecting a boy as Vogue appeared to let slip the gender during a TV appearance earlier this year.

What do you think about Spencer and Vogue tying the knot? Leave us a comment on our Facebook page @EntertainmentDailyFix and let us know what you think!