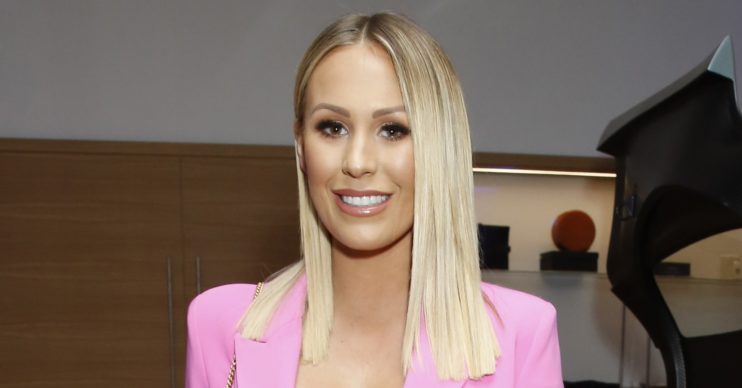 Pregnant Kate Ferdinand ‘fears she won’t cope with a baby’

Kate Ferdinand is a loving stepmum to Rio Ferdinand’s three children – but she fears she will struggle with a baby of her own.

The pregnant star revealed she has never changed a nappy before.

In a touching video on Thursday, she told the world she is expecting.

The crazy house is about to get a little bit crazier 🙊… every time I watch this it makes me cry, the best reaction 😢❤️🤗 Baby Ferdy we are all so excited to meet you 💗💙

“This crazy house is about to get a little bit crazier,” she wrote. “Every time I watch this it makes me cry, the best reaction.

“Baby Ferdy we are all so excited to meet you.”

Kate and Rio can be seen telling his three children Lorenz, 13, Tate, 11, and nine-year-old Tia, from his marriage to late wife Rebecca.

But Kate has previously expressed fears about coping with a baby.

“It’s going to be a big adjustment”

It is quite a different challenge to caring for three older step children.

She’s never had to look after a baby before.

She continued: “I said, ‘Rio, I’ve never changed a nappy’. He was like, ‘What?!’ But I haven’t had children and I don’t have brothers and sisters. I haven’t got nieces and nephews.

Kate added: “It’s going to be a big adjustment, because I feel like I know the older stage of being a mum but not to a newborn.”

She said she was worried about after school clubs.

All three of Rio’s children go to different after school clubs – and she was concerned how a newborn would fit into that mix.

However, she admitted she was excited about having a baby too.

“I think it will bring us all together, tighter, closer as a knit,” Kate said.

What do you think about this story? Go to our Facebook page @EntertainmentDailymix and leave a comment to let us know your views.