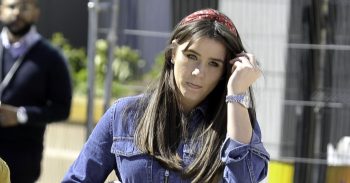 She shared a hilarious video with fans

Actress Brooke Vincent has been refreshingly honest about the change in her body since becoming pregnant, and now she’s revealed that her thighs are becoming too big to fit in her clothes.

The Coronation Street star shared a funny video on her Instagram Story, which revealed her leather leggings squeaking as she walked along.

The 26-year-old complained that her leggings are becoming too tight for her to wear as she gets further into pregnancy.

Brooke, who plays Sophie Webster on the cobbles, captioned her hilarious online clip with: “When your thighs are getting too big to wear your leather leggings – brilliant.”

As she walked along, her leggings could be heard crunching rather loudly.

It’s not the first time Brooke has had a maternity wardrobe dilemma.

She recently revealed her frustration about not being able to find comfortable maternity gym wear.

She told her fans on Instagram: “I’m going to be known as the girl in the bright leggings if I carry on!!”

Brooke announced that she is expecting her first child with boyfriend Kean Bryan last month.

The star has since embarked on a pregnancy workout regime but she explained that she isn’t doing it for her appearance.

Brooke wrote in a message on Instagram: “I understand in nine months my body is going to change and I am going to gain weight as my baby grows.

“I want to stress I am not looking for visual results, I wanted to go back (to the gym) to start feeling good about myself and catch up on the endorphins I’ve been missing these past weeks, yet most importantly I want to be the healthiest I can be whilst carrying my baby.”

Brooke, who has been dating 22-year-old Sheffield United player Kean for three years, admitted her pregnancy news came as a surprise.

But she said she is looking forward to their baby creating an “extra bond” between them.